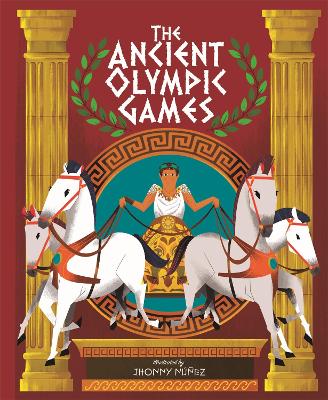 Travel back in time to Ancient Greece to discover the origins of the Olympic Games.Bright, bold and dynamic artwork bring to life the origins of the Olympic Games. Find out about the legend behind the games, the original events and the excitement that filled Olympia during the Olympic Festival. See how the competitors used to train and learn about each of the original events that took place, including chariot racing, wrestling, the discuss, javelin and boxing. Get the Olympic buzz from all the excitement of the hippodrome, Olympic ceremonies and celebrations, and learn about the importance of the Heraia - the competition for women organised by women.This book provides a brilliant and striking introduction to the Ancient Olympics for children aged 7+.

Other Editions - The Ancient Olympic Games by Jhonny Nunez » Have you read this book? We'd like to know what you think about it - write a review about The Ancient Olympic Games book by Jhonny Nunez and you'll earn 50c in Boomerang Bucks loyalty dollars (you must be a Boomerang Books Account Holder - it's free to sign up and there are great benefits!)


A Preview for this title is currently not available.
More Books By Jhonny Nunez
View All