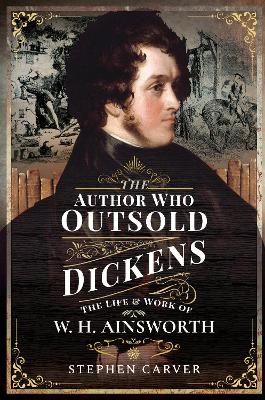 The Author Who Outsold Dickens: The Life and Work of W H Ainsworth

Description - The Author Who Outsold Dickens: The Life and Work of W H Ainsworth by Stephen Carver

William Harrison Ainsworth (1805 - 1882) is probably the most successful 19th Century writer that most people haven't heard of. Journalist, essayist, poet and, most of all, historical novelist, Ainsworth was a member of the early-Victorian publishing elite, and Charles Dickens's only serious commercial rival until the late-1840s, his novels Rookwood and Jack Shepherd beginning a fashion for tales of Georgian highwaymen and establishing the legend of Dick Turpin firmly in the National Myth. He was in the Dickens' circle before it was the Dickens' circle and counted among his friends the literary lions of his age: men like Charles Lamb, J.G. Lockhart, Leigh Hunt, W.M. Thackeray and, of course, Dickens; the publishers Henry Colburn and Richard Bentley; and the artists Sir John Gilbert, George Cruikshank, and Phiz' (Hablot K. Browne). He also owned and edited Bentley's Miscellany (whose editorship he assumed after Dickens), the New Monthly Magazine, and Ainsworth's Magazine. In his heyday, Ainsworth commanded a massive audience until a moral panic - the so-called Newgate Controversy' - about the supposedly pernicious effects on working class youth of the criminal romances on which his reputation was built effectively destroyed his reputation as a serious literary novelist. AUTHOR: Dr Stephen Carver is a cultural historian, freelance editor and novelist. For sixteen years, he taught literature and creative writing at the University of East Anglia, spending three years in Japan as Professor of English at the University of Fukui. Stephen has published extensively on 19th century literature and history; he is the author of The 19th Century Underworld: Crime, Controversy and Corruption, and Shark Alley: The Memoirs of a Penny-a-Liner, a historical novel about the wreck of the Birkenhead. 32 b/w illustrations

Other Editions - The Author Who Outsold Dickens: The Life and Work of W H Ainsworth by Stephen Carver Book Reviews - The Author Who Outsold Dickens: The Life and Work of W H Ainsworth by Stephen Carver

» Have you read this book? We'd like to know what you think about it - write a review about The Author Who Outsold Dickens: The Life and Work of W H Ainsworth book by Stephen Carver and you'll earn 50c in Boomerang Bucks loyalty dollars (you must be a Boomerang Books Account Holder - it's free to sign up and there are great benefits!)


A Preview for this title is currently not available.
More Books By Stephen Carver
View All