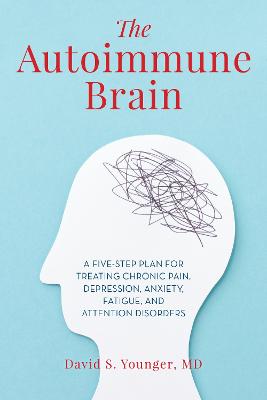 There are millions of people who experience issues related to brain health--depression, attention issues, anxiety, forgetfulness, fatigue, and even chronic pain--yet can't figure out what's causing their problems and can't find any relief. They may have seen a myriad of doctors, many of whom do not take their complaints seriously, or worse, turn to the easy, albeit inappropriate fix of antidepressants or antianxiety medications. Traditional medications, supplements, or other therapies haven't worked. No matter what their age-from children to teens to seniors--these people and their loved ones are frustrated, scared, and confused by their continued poor health. Countless others display more severe psychiatric symptoms that seem to come out of nowhere: obsessive-compulsive behaviors, suicidal thoughts, tics, and mood swings reminiscent of bipolar disorder. Sometimes, the person affected is the only one that notices a change to the way they think or feel, and they suffer in silence. Or, they reach out to try to get help, and are all too frequently misdiagnosed. Now, David Younger, a world-renowned physician, board-certified in Internal Medicine, Neurology and Psychiatry, with postdoctoral training in public health and epidemiology, can finally provide relief to these patients and their families. His diagnostic techniques and treatment protocols will help readers identify the true cause of their symptoms and put them on a clear path to healing so they no longer feel crazy, out of control, forgetful, and exhausted.

A 5-Step Plan for Optimal Brain and Body Health
Younger has focused his career on neuroimmunology--the intersection of neurology and how the immune system affects the brain. He was among the first to bring to the nation's awareness the triad of infection, immunity, and inflammation, abbreviated as "I-Cubed," and known more commonly by physicians as post-infectious autoimmunity. More importantly, Younger has developed cutting edge treatment protocols centered on immune modulatory therapy (known as IVIg) that have been adopted by doctors across the country and will be featured in this book. His unique treatment plan has become the most widely employed immune modulating agent for autoimmune neurological disorders.

Including the most recent research and illuminating patient anecdotes, this new book highlights an early detection and treatment model that is based on a simple 5-step plan that can help readers of all ages reverse their brain health issues as well as their physical health by resetting the immune system. This will be the first book to explain to a lay audience in clear and accessible language, how seemingly unrelated diseases are linked to a common cause-- autoimmunity--and can be treated by following a singular immune-enhancing program that addresses brain health. While our genetic blueprint presumably maps an unchangeable path to illnesses, epigenetics shows that the genes for a variety of inflammatory autoimmune and neurodegenerative disorders may be silenced by following this holistic approach. Much like high blood pressure, obesity, and other persistent illnesses, autoimmunity needs to be managed daily with an individualized program that works. This book will present Younger's new paradigm for identifying illness and resetting the immune system,
summarized by the acronym TAPES:
* Test for the most likely autoimmune disturbance right at home, and discover how a specific autoimmune response may be affecting brain health
* Apply immune modulating therapies (under a doctor's care) that will address both the immune response and changes to brain health
* Participate in the most effective behavioral/therapeutic options to reduce stress and reverse fatigue, anxiety, depression, and memory loss
* Eat & Exercise to restore brain health, alleviate pain, and enhance the immune system
* Survey your home for chemical exposures, and remove mold, heavy metals, and other allergens that can stand in the way of a full recovery

Tests
The finished book will feature three unique tests readers can rely on to help diagnose an autoimmune brain health issue. The first test will clearly show how an underlying illness may in cause brain health symptoms including fatigue, forgetfulness, anxiety, depression, poor attention, loss of memory, and more. Created specifically for this book, these tests are the best and least invasive ways for readers to figure out and manage their symptoms: the results will direct them to the appropriate chapters in the book for specific treatments.

» Have you read this book? We'd like to know what you think about it - write a review about The Autoimmune Brain: A Five-Step Plan for Treating Chronic Pain, Depression, Anxiety, Fatigue, and Attention Disorders book by David S. Younger and you'll earn 50c in Boomerang Bucks loyalty dollars (you must be a Boomerang Books Account Holder - it's free to sign up and there are great benefits!)