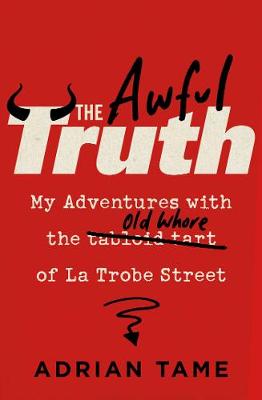 The Awful Truth: My adventures with Australia's most notorious tabloid

Description - The Awful Truth: My adventures with Australia's most notorious tabloid by Adrian Tame

Before Fake News, there was the real Fake News. There was Truth.

Hailed as 'a fearless exposer of folly, vice and crime' when it first hit the streets in the 1890s, Truth was later condemned by a High Court Judge as 'a wretched little paper, reeking of filth, injurious to the health of house servants and young girls'. Much later it earned the nickname 'The Old Whore of La Trobe Street'. Truth was called many things but it was never boring.

Adrian Tame knows that better than anyone as he worked for Truth for more than a decade as a reporter and news editor. In the years it was owned by the Murdoch family he worked alongside young Rupert as he cut his teeth on the shock horror scandals that graced the pages of Truth when it was selling a whopping 400,000 copies a week.

Funny, often outrageous and always thoroughly entertaining, The Awful Truth is a rollercoaster ride through an colourful era of newspapers and larger-than-life reporters that we will never see the like of again.


Book Reviews - The Awful Truth: My adventures with Australia's most notorious tabloid by Adrian Tame

» Have you read this book? We'd like to know what you think about it - write a review about The Awful Truth: My adventures with Australia's most notorious tabloid book by Adrian Tame and you'll earn 50c in Boomerang Bucks loyalty dollars (you must be a Boomerang Books Account Holder - it's free to sign up and there are great benefits!)


A Preview for this title is currently not available.
More Books By Adrian Tame
View All