Paris, 1789. English spy Attica Morgan's success freeing kidnapped Britons has earned her acclaim with an underground network. But it has also led to attention of dangerously powerful men. So when she's given a new assignment in Paris, a city with revolution in the air, her instinct is to run.

Because in Paris, nothing is what it seems. Skirmishes in the city are rife and English visitors are viewed with suspicion. Attica is charged with investigating the murder of a rebel in the morgue of the Bastille, that notorious prison of no return. A murder her backers are convinced is part of a much more treacherous plot.

With France is on the cusp of a bloody revolution, Attica soon realizes her mission is a great deal deadlier than she bargained for. A mythic treasure has vanished, a strange man named Robespierre wants her dead, and on the city streets, all hell is about to break loose ...

Other Editions - The Bastille Spy by C. S. Quinn 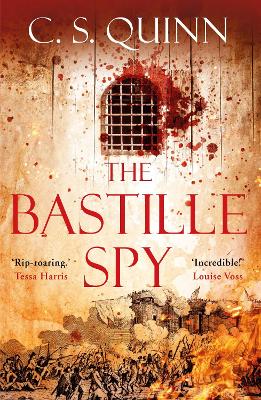 » Have you read this book? We'd like to know what you think about it - write a review about The Bastille Spy book by C. S. Quinn and you'll earn 50c in Boomerang Bucks loyalty dollars (you must be a Boomerang Books Account Holder - it's free to sign up and there are great benefits!)


A Preview for this title is currently not available.
More Books By C. S. Quinn
View All