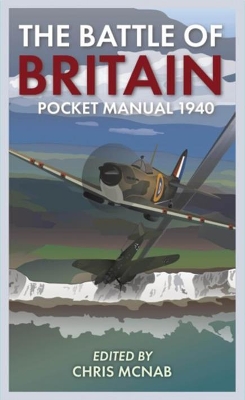 The Battle of Britain Pocket Manual 1940

Description - The Battle of Britain Pocket Manual 1940 by Chris McNab

Pocket manual detailing the training and operations of the British pilots, ground crew and anti-aircraft gunners. In the summer of 1940, Britain stood alone. For three long months, brave young RAF pilots took off every day, ready to defend British skies against large-scale Luftwaffe raide. 'The Few' were young, but they were trained and they were determined. Eighty years on the last of the pilots to fly in the Battle of Britain are feted, and their part in World War II is widely remembered. This pocket manual covers the training that these young pilots would have had, and the air combat tactics they were taught to use against the German raiders. It also covers the role of the ground crews; control and command systems; anti-aircraft defences; and radar and raid detection. AUTHOR: Dr Chris McNab is a writer and editor specialising in military history, with a major research interest in the evolution of modern manoeuvre warfare. He has written or contributed to numerous titles, including Campaigns of World War II, Order of Battle: German Kriegsmarine, Order of Battle: German Luftwaffe, World War II Data Book: The Third Reich, 1933-45 and World War II Data Book: The SS, 1923-45.

» Have you read this book? We'd like to know what you think about it - write a review about The Battle of Britain Pocket Manual 1940 book by Chris McNab and you'll earn 50c in Boomerang Bucks loyalty dollars (you must be a Boomerang Books Account Holder - it's free to sign up and there are great benefits!)