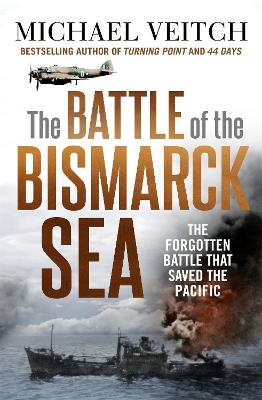 The Battle of the Bismarck Sea

Description - The Battle of the Bismarck Sea by Michael Veitch

In the thick of World War II, during the first week of March 1943, Japan made a final, desperate lunge for control of the South West Pacific. In the ensuing Battle of the Bismarck Sea, a force of land-based Australian and American planes attacked a massive convoy of Japanese warships. The odds were against them. But a devastating victory was won and Japan's hopes of regaining the initiative in New Guinea destroyed. More importantly for Australians, the victory decisively removed any possibility that Australia might be invaded by Japanese forces. It was, for us, one of the most significant times in our history - a week when our future was profoundly in the balance. Bestselling author Michael Veitch tells the riveting story of this crucial moment in history - how the bravery of young men and experienced fighters, renegades and rule-followers, overcame some of the darkest days of World War II.

Book Reviews - The Battle of the Bismarck Sea by Michael Veitch

» Have you read this book? We'd like to know what you think about it - write a review about The Battle of the Bismarck Sea book by Michael Veitch and you'll earn 50c in Boomerang Bucks loyalty dollars (you must be a Boomerang Books Account Holder - it's free to sign up and there are great benefits!)


A Preview for this title is currently not available.
More Books By Michael Veitch
View All

Barney Greatrex: From Bomber Command to the French Resistance - the stirring story of an Australian hero
$19.31 $22.99

Hell Ship: The true story of the plague ship Ticonderoga, one of the most calamitous voyages in Australian history
$19.31 $22.99

The Forgotten Islands: A Personal Adventure Through the Islands of Bass Strait
$35.99 $39.99