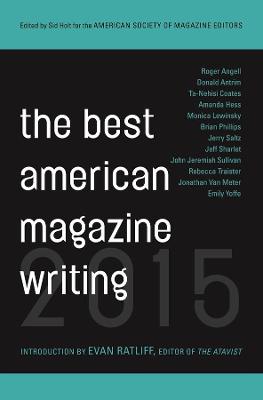 The American Society of Magazine Editors

This year's Best American Magazine Writing features articles on politics, culture, sports, sex, race, celebrity, and more. Selections include Ta-Nehisi Coates's intensely debated "The Case For Reparations" (The Atlantic) and Monica Lewinsky's reflections on the public-humiliation complex and how the rules of the game have (and have not) changed (Vanity Fair). Amanda Hess recounts her chilling encounter with Internet sexual harassment (Pacific Standard) and John Jeremiah Sullivan shares his investigation into one of American music's greatest mysteries (New York Times Magazine).

The anthology also presents Rebecca Traister's acerbic musings on gender politics (The New Republic) and Jerry Saltz's fearless art criticism (New York). James Verini reconstructs an eccentric love affair against the slow deterioration of Afghanistan in the twentieth century (The Atavist); Roger Angell offers affecting yet humorous reflections on life at ninety-three (The New Yorker); Tiffany Stanley recounts her poignant experience caring for a loved one with Alzheimer's (National Journal); and Jonathan Van Meter takes an entertaining look at fashion's obsession with being a social-media somebody (Vogue). Brian Phillips describes his surreal adventures in the world of Japanese ritual and culture (Grantland), and Emily Yoffe reveals the unforeseen casualties in the effort to address the college rape crisis (Slate). The collection concludes with a work of fiction by Donald Antrim, exploring the geography of loss. (The New Yorker).

» Have you read this book? We'd like to know what you think about it - write a review about The Best American Magazine Writing 2015 book by Sid Holt and you'll earn 50c in Boomerang Bucks loyalty dollars (you must be a Boomerang Books Account Holder - it's free to sign up and there are great benefits!)


A Preview for this title is currently not available.
More Books By Sid Holt
View All