With the work of journalists under fire around the world, this year's anthology of National Magazine Awards finalists and winners is a timely reminder of the power of journalism. These pieces from writers driven to explore America's fault lines include Shane Bauer's harrowing "My Four Months as a Private Prison Guard" (Mother Jones), a visceral portrait of the abuses of the carceral system, and Sarah Stillman's account of the havoc wreaked on young people's lives when they are put on sex-offender registries (The New Yorker). In two different considerations of parenting, Nikole Hannah-Jones looks for a school for her daughter in a rapidly changing, racially divided Brooklyn (New York Times Magazine) and Michael Chabon takes his thirteen-year-old son to Fashion Week in Paris (GQ). Pamela Colloff explores how the 1966 University of Texas Tower mass shooting changed the course of one survivor's life (Texas Monthly), and Siddhartha Mukherjee depicts the art and agony of oncology (New York Times Magazine).
Other selections take up the shocks of the election, including Matt Taibbi's irreverent dispatches from the campaign trail (Rolling Stone) and George Saunders's transfixing account of Trump's rallies (The New Yorker). Jeffrey Goldberg talks through Obama's foreign-policy legacy with the president (The Atlantic), Andrew Sullivan fears for the future of democracy (New York), and Gabriel Sherman relates how the women of Fox News brought to light Roger Ailes's predations (New York). Joining them are Rebecca Solnit's wide-ranging Harper's commentary, Becca Rothfeld's pondering women waiting from The Odyssey to Tinder (Hedgehog Review), and bold expeditions into nature: David Quammen ventures to Yellowstone to consider the future of wild places (National Geographic), and Mac McClelland sets off for Cuba in search of the ivory-billed woodpecker (Audubon).

» Have you read this book? We'd like to know what you think about it - write a review about The Best American Magazine Writing 2017 book by Sid Holt and you'll earn 50c in Boomerang Bucks loyalty dollars (you must be a Boomerang Books Account Holder - it's free to sign up and there are great benefits!) 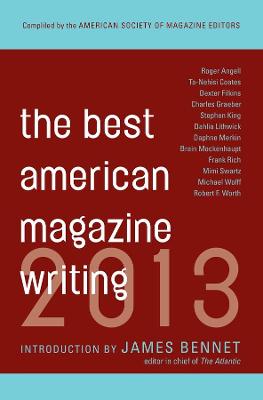