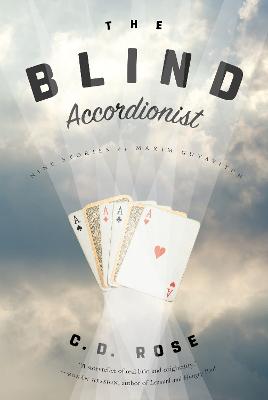 A supposedly long lost collection of fable-like stories supposedly written by the little-known middle European writer Maxim Guyavitch ... with a helpful intro and afterword making it hilariously clear that the keyword is "supposedly."

In the novel WHO'S WHO WHEN EVERYONE IS SOMEONE ELSE, the character "C.D. Rose" (not to be confused with the author C.D. Rose) searches an unnamed middle-European city for the long-lost manuscript of a little-known writer named Maxim Guyavitch. That search was fruitless, but in THE BLIND ACCORDIONIST, "C.D. Rose" has found the manuscript--nine sparkling, fable-like short stories--and he presents them here with an (hilarious) introduction explaining the discovery, and an afterword providing (hilarious) critical commentary on the stories, and what they might reveal about the mysterious Guyavitch.

THE BLIND ACCORDIONIST is another masterful book of world-making by the real C.D. Rose, absorbing in its mix of intelligence and light-heartedness, and its ultimate celebration of literature itself. It is the third novel in the series about "C.D. Rose," although the reader does not need to have read the previous two books. (The first in the series was THE BIOGRAPHICAL DICTIONARY OF LITERARY FAILURE, containing portraits of dunsuccessful writers; the second was WHO'S WHO WHEN EVERYONE IS SOMEONE ELSE, in which the author of the DICTIONARY, "C.D. Rose," searches for the manuscript of his favorite dead writer, Maxim Guyavitch, while on a book tour for the DICTIONARY.)

Like those books, THE BLIND ACCORDIONIST can be read both as a simple but wonderful collection of quirky stories, and as comedy--or as a beautiful and moving elegy on the nobility of writers wanting to be read.

» Have you read this book? We'd like to know what you think about it - write a review about The Blind Accordionist book by C.D. Rose and you'll earn 50c in Boomerang Bucks loyalty dollars (you must be a Boomerang Books Account Holder - it's free to sign up and there are great benefits!)


A Preview for this title is currently not available.
More Books By C.D. Rose
View All