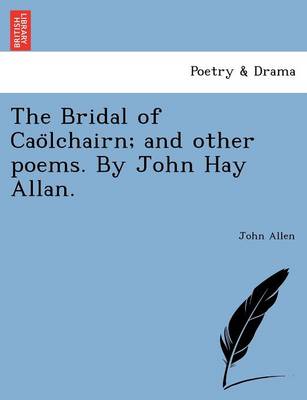 The Bridal of CaoÌˆlchairn; and other poems. By John Hay Allan.

Description - The Bridal of CaoÌˆlchairn; and other poems. By John Hay Allan. by John Allen


Title: The Bridal of Cao lchairn; and other poems. By John Hay Allan.

The British Library is the national library of the United Kingdom. It is one of the world's largest research libraries holding over 150 million items in all known languages and formats: books, journals, newspapers, sound recordings, patents, maps, stamps, prints and much more. Its collections include around 14 million books, along with substantial additional collections of manuscripts and historical items dating back as far as 300 BC.

The POETRY & DRAMA collection includes books from the British Library digitised by Microsoft. The books reflect the complex and changing role of literature in society, ranging from Bardic poetry to Victorian verse. Containing many classic works from important dramatists and poets, this collection has something for every lover of the stage and verse.

++++
The below data was compiled from various identification fields in the bibliographic record of this title. This data is provided as an additional tool in helping to insure edition identification:
++++

Buy The Bridal of CaoÌˆlchairn; and other poems. By John Hay Allan. by John Allen from Australia's Online Independent Bookstore, Boomerang Books.


Book Reviews - The Bridal of CaoÌˆlchairn; and other poems. By John Hay Allan. by John Allen

» Have you read this book? We'd like to know what you think about it - write a review about The Bridal of CaoÌˆlchairn; and other poems. By John Hay Allan. book by John Allen and you'll earn 50c in Boomerang Bucks loyalty dollars (you must be a Boomerang Books Account Holder - it's free to sign up and there are great benefits!)

A Preview for this title is currently not available.
More Books By John Allen
View All

Inquiry Into the Rise and Growth of the Royal Prerogative in England. a New Ed., with ... Biographical Notices, Etc. to Which Is Added an Inquiry Into the Life and Character of King Eadwig
$93.01 $103.34

A Correct Report of an Appeal Against an Order of Filiation, in Which Thomas Jowett, Surgeon, Was the Appellant, and the Churchwardens and Overseers of the Parish of St. Mary, Nottingham, the Respondents
$31.20 $34.67

An Oration Upon the Beauties of Liberty, Or, the Essential Rights of the Americans: Delivered at the Second Baptist Church in Boston Upon the Last Annual Thanksgiving: Humbly Dedicated to the Right-Honourable the Earl of Dartmouth.
$29.21 $32.46

An Essay on the Policy of Appropriations Being Made by the Government of the United States, for Purchasing, Liberating and Colonizing Without the Territory of the Said States, the Slaves Thereof: In Numbers, Some of Which Have Been Published in The...
$31.20 $34.67

The Fathers, the Reformers, and the Public Formularies of the Church of England, in Harmony with Cal
$47.04 $52.27