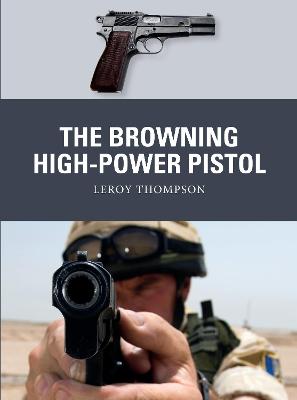 Making its debut in 1935, the Browning High-Power was the world's most widely used military pistol for much of the 20th century. Military and law-enforcement agencies in more than 90 countries have issued the High-Power and it has seen combat in conflicts from World War II through to the 'War on Terror'. After conquering Belgium, Nazi Germany produced more than 300,000 High-Powers for use by the Waffen-SS, Fallschirmjager and others, and after 1945 the High-Power became standard for most NATO-armed forces as well as scores of others.

Chambered for the 9x19mm Luger cartridge, John Browning's High-Power improved on the classic Colt M1911 design, especially in its use of a far simpler takedown system. The pistol's innovative 13-round magazine, designed by Dieudonne Saive, staggered the cartridges for higher capacity without unduly increasing the grip size. During its 82-year production run at Fabrique Nationale (FN) in Belgium, the design evolved slightly, but a 2017 High-Power was still easily recognizable as a descendant of the original model.

Packed with gripping material including detailed technical specifications, contemporary photographs and highly accurate artist's renditions, this title is a comprehensive and informative guide to the world's most iconic semi-automatic pistol.

» Have you read this book? We'd like to know what you think about it - write a review about The Browning High-Power Pistol book by Leroy Thompson and you'll earn 50c in Boomerang Bucks loyalty dollars (you must be a Boomerang Books Account Holder - it's free to sign up and there are great benefits!)


A Preview for this title is currently not available.
More Books By Leroy Thompson
View All