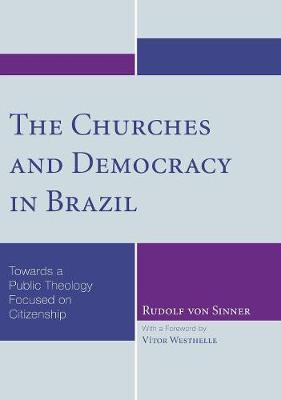 The Churches and Democracy in Brazil

Description - The Churches and Democracy in Brazil by Rudolf Von Sinner

Brazil is a rapidly emerging country. Brazilian theology, namely the Theology of Liberation, has become well known in the 1970s and 1980s. The politically active Base Ecclesial Communities and the progressive posture of the Roman Catholic Church contrasted with a steadily growing number of evangelicals, mostly aligned with the military regime but attractive precisely to the poor. After democratic transition in the mid-1980s, the context changed considerably. Democracy, growing religious pluralism and mobility, a vibrant civil society, the political ascension of the Worker's Party and growing wealth, albeit within a continuously wide social gap, are some of the elements that show the need of a new approach to theology. It must be a theology that is both critical and constructive, resisting and cooperative, a theology that is able to give orientation to the churches, valuing and encouraging their contribution in society while avoiding attempts of imposition. The Churches and Democracy in Brazil, the fruit of years of interdisciplinary study of the Brazilian context and its main churches and theology, makes its case for an ecumenically articulated public theology. It seeks inspiration mainly in Luther and Lutheran theology, emphasizing human dignity, freedom, trust, the disposition to serve, and the ability to endure the ambiguities of reality, as well as a fresh interpretation of the doctrine of the two regiments. These are the fundamental elements of what makes human beings full members of the body politic: citizenship, their right to have rights and to be able to effectively live them, together with their corresponding duties, in a move of growing political participation conscious of their religious motivation in view of the commonweal. ""Professor von Sinner has supplied the field of 'public theology' with one of its most important works of this new century. He has written to clarify the public role of religion in Brazil, clearly one of the marvels of the emerging South . . . [T]his serves as background for his critical, creative, and constructive proposals for a public theology able to aid faithful Christians be responsible citizens in a rapidly developing country now in transition to a major player in the international community of nations. I commend it with enthusiasm!"" -Max L. Stackhouse Princeton Theological Seminary ""von Sinner's book is a landmark in the further development of public theology. His thorough study of Brazil and his dialogue with South African public theology yields a convincing interpretation of the close relationship between public theology and liberation theology . . . I highly recommend this book to all who want to better understand the profile of the developing public theologies worldwide."" -Heinrich Bedford-Strohm University of Bamberg ""Rudolf von Sinner's book is a milestone in the development of a modern public theology. It connects social analysis, historical information, a critical sociology of religious movements, and the normative aspects of political ethics. Under conditions of a religious pluralism as of today's Brazil it is an invitation to a human rights based, inclusive, and participative type of constitutional democracy. . . Altogether a very impressive and useful work of reference for an international public theology."" -Wolfgang Lienemann University of Bern Rudolf von Sinner is Professor of Systematic Theology, Ecumenism, and Inter-religious Dialogue at the Escola Superior de Teologia (Lutheran School of Theology) at Sao Leopoldo, Rio Grande do Sul, Brazil. 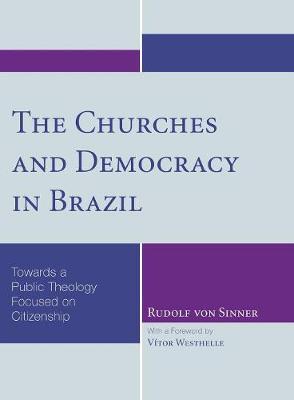 » Have you read this book? We'd like to know what you think about it - write a review about The Churches and Democracy in Brazil book by Rudolf Von Sinner and you'll earn 50c in Boomerang Bucks loyalty dollars (you must be a Boomerang Books Account Holder - it's free to sign up and there are great benefits!)


A Preview for this title is currently not available.
More Books By Rudolf Von Sinner
View All