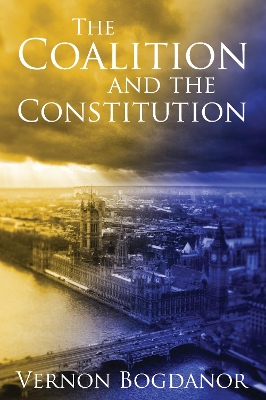 The Coalition and the Constitution

Description - The Coalition and the Constitution by Vernon Bogdanor

`England', Benjamin Disraeli famously said, `does not love coalitions'. But 2010 saw the first peace-time coalition in Britain since the 1930s. The coalition, moreover, may well not be an aberration. For there are signs that, with the rise in strength of third parties, hung parliaments are more likely to recur than in the past. Perhaps, therefore, the era of single-party majority government, to which we have become accustomed since 1945, is coming to an end. But is the British constitution equipped to deal with coalition? Are alterations in the procedures of parliament or government needed to cope with it?

The inter-party agreement between the coalition partners proposes a wide ranging series of constitutional reforms, the most important of which are fixed-term parliaments and a referendum on the alternative vote electoral system, to be held in May 2011. The coalition is also proposing measures to reduce the size of the House of Commons, to directly elect the House of Lords and to strengthen localism. These reforms, if implemented, could permanently alter the way we are governed.

This book analyses the significance of coalition government for Britain and of the momentous constitutional reforms which the coalition is proposing. In doing so it seeks to penetrate the cloud of polemic and partisanship to provide an objective analysis for the informed citizen.

Buy The Coalition and the Constitution by Vernon Bogdanor from Australia's Online Independent Bookstore, Boomerang Books.

Book Reviews - The Coalition and the Constitution by Vernon Bogdanor

» Have you read this book? We'd like to know what you think about it - write a review about The Coalition and the Constitution book by Vernon Bogdanor and you'll earn 50c in Boomerang Bucks loyalty dollars (you must be a Boomerang Books Account Holder - it's free to sign up and there are great benefits!)

Book Review: The Coalition and the Constitution by Vernon Bogdanor - Reviewed by GavelBasher (12 Jun 2011)

As we write, the UK’s new coalition government has been in power over a year now, since May 2010. If a week is a long time in politics, then a year must be the political equivalent of a millennium, which means that the new coalition is not that new anymore!

Since it first emerged, it has set to work with dizzying speed to impose its centrist, but radical and reformist agenda, presented as ‘the Big Society’.

The typical ‘informed citizen’ at whom Bogdanor’s absorbing and erudite book is aimed, has watched this process with a mixture of skepticism and hope, first predicting gloomily that the coalition would break up within six months.

Six months later, the skeptics have been somewhat confounded by what has become a relatively stable, pragmatic and for the most part, effective form of government, with the Opposition exhibiting various degrees of dysfunction and disarray.

As the author reminds us, this -- the first peacetime coalition in Britain since the 1930s, has come about as the result of a hung parliament, rather than some form of national emergency and as such, is more likely to recur in the future. He goes on to question whether the British constitution is equipped to deal with it, particularly in the light of proposed constitutional reforms, including fixed-term parliaments and an elected second chamber.

Another major reform (some would have called it a retrograde step) proposed by the Liberal Democrats was the alternative vote method of election to which the author devotes a whole chapter. A/V, Bogdanor says in effect, would not necessarily change much, but could well, ‘facilitate future coalition governments in Britain.’

The promised referendum, however, demolished the A/V camp, which was roundly and soundly defeated by the great British electorate in May 2011 after this book was published. The pace of political change has a way of leaving even learned political commentators reeling.

Bogdanor then observes that the British constitution occupies no ‘stable resting place; it remains in flux’ -- just what you might expect from an unwritten constitution which is pragmatic rather than prescriptive – and which tends to be the way we British like our constitutions. Bogdanor views somewhat with alarm ‘the future of a constitution whose fabled adaptability and flexibility are likely to be severely tested in the years ahead.’

This book is written for the ‘informed citizen’ as well as lawyers, historians, academics, students, journalists and aspiring politicos. It’s an objective and largely non-partisan work, and ‘an attempt to write the history of the future’ – which certainly makes this important book an intriguing acquisition for the well-stocked political and constitutional law library as our politics remains firmly in coalition mode for the foreseeable future!


A Preview for this title is currently not available.
More Books By Vernon Bogdanor
View All