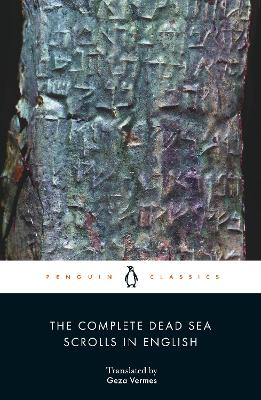 Discovered on the northwest shore of the Dead Sea in the decade after the Second World War, the Dead Sea Scrolls are a historical and religious record of immense significance, altering our understanding of Jewish and early Christian history.The Complete Dead Sea Scrolls in English is translated and edited with an introduction and notes by Geza Vermes in Penguin Classics.
'He will heal the wounded and revive the dead and bring good news to the poor'
The discovery of the Dead Sea Scrolls in the Judaean desert between 1947 and 1956 was one of the greatest archaeological finds of all time. These extraordinary manuscripts appear to have been hidden in the caves at Qumran by the Essenes, a Jewish sect in existence before and during the time of Jesus. Written in Hebrew, Aramaic and Greek, the scrolls have transformed our understanding of the Hebrew Bible, early Judaism and the origins of Christianity.
This acclaimed translation by Geza Vermes, the world's leading Dead Sea Scrolls scholar, has established itself as the classic version of these texts. This revised seventh edition contains a new foreword, amendments and a fully updated bibliography.
Geza Vermes (b.1924) was born in Hungary. He studied in Budapest and Louvain. He was the first Professor of Jewish Studies at Oxford. His other books published by Penguin are The Changing Faces of Jesus and The Authentic Gospel of Jesus.
'No translation of the scrolls is either more readable or more authoritative than that of Vermes'
The Times Higher Education Supplement
'Excellent, up-to-date ... will enable the general public to read the non-biblical scrolls and to judge for themselves their importance'
The New York Times Book Review
'Fascinating, not least because of Geza Vermes' wonderful introduction and translation'
Justin Cartwright, Daily Telegraph Books of the Year

» Have you read this book? We'd like to know what you think about it - write a review about The Complete Dead Sea Scrolls in English (7th Edition) book by Dr Geza Vermes and you'll earn 50c in Boomerang Bucks loyalty dollars (you must be a Boomerang Books Account Holder - it's free to sign up and there are great benefits!)


A Preview for this title is currently not available.
More Books By Dr Geza Vermes
View All