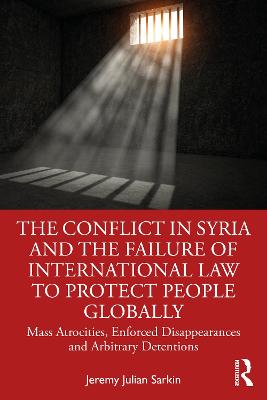 The Conflict in Syria and the Failure of International Law to Protect People Globally: Mass Atrocities, Enforced Disappearances and Arbitrary Detentions

Description - The Conflict in Syria and the Failure of International Law to Protect People Globally: Mass Atrocities, Enforced Disappearances and Arbitrary Detentions by Jeremy Julian Sarkin

This book explores, through the lens of the conflict in Syria, why international law and the United Nations have failed to halt conflict and massive human rights violations in many places around the world which has allowed tens of millions of people to be killed and hundreds of millions more to be harmed.

The work presents a critical socio-legal analysis of the failures of international law and the United Nations (UN) to deal with mass atrocities and conflict. It argues that international law, in the way it is set up and operates, falls short in dealing with these issues in many respects. The argument is that international law is state-centred rather than victim-friendly, is, to some extent, outdated, is vague and often difficult to understand and, therefore, at times, hard to apply. While various accountability processes have come to the fore recently, processes do not exist to assist individual victims while the conflict occurs or the abuses are being perpetrated. The book focuses on the problems of international law and the UN and, in the context of the many enforced disappearances and arbitrary detentions in Syria, why nothing has been done to deal with a rogue state that has regularly violated international law. It examines why the responsibility to protect (R2P) has not been applied and why it ought to be used, generally, and in Syria. It uses the Syrian context to evaluate the weaknesses of the system and why reform is needed. It examines the UN institutional mechanisms, the role they play and why a civilian protection system is needed. It examines what mechanism ought to be set up to deal with the possible one million people who have been disappeared and detained in Syria.

The book will be a valuable resource for students, academics and policy-makers working in the areas of public international law, international human rights law, political science and peace and security studies.

Other Editions - The Conflict in Syria and the Failure of International Law to Protect People Globally: Mass Atrocities, Enforced Disappearances and Arbitrary Detentions by Jeremy Julian Sarkin 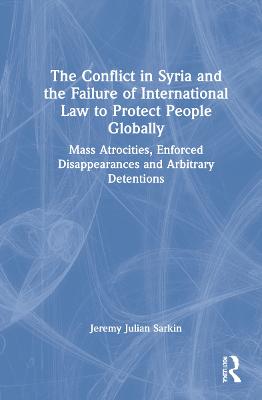 » Have you read this book? We'd like to know what you think about it - write a review about The Conflict in Syria and the Failure of International Law to Protect People Globally: Mass Atrocities, Enforced Disappearances and Arbitrary Detentions book by Jeremy Julian Sarkin and you'll earn 50c in Boomerang Bucks loyalty dollars (you must be a Boomerang Books Account Holder - it's free to sign up and there are great benefits!)


A Preview for this title is currently not available.
More Books By Jeremy Julian Sarkin
View All

The Conflict in Syria and the Failure of International Law to Protect People Globally: Mass Atrocities, Enforced Disappearances and Arbitrary Detentions
$249.48 $252.00