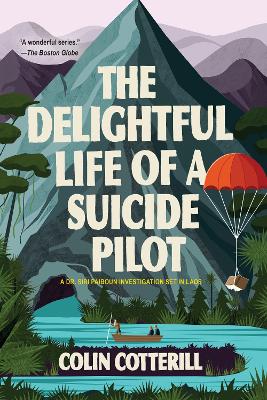 The Delightful Life Of A Suicide Pilot

Description - The Delightful Life Of A Suicide Pilot by Colin Cotterill

Laos, 1981- When an unofficial mailman drops off a strange bilingual diary, Dr. Siri is intrigued. Half is in Lao, but the other half is in Japanese, which no one Siri knows can read; it appears to have been written during the Second World War. Most mysterious of all, it comes with a note stapled to it- Dr. Siri, we need your help most urgently. But who is "we," and why have they left no return address?

To the chagrin of his wife and friends, who have to hear him read the diary out loud, Siri embarks on an investigation by examining the text. Though the journal was apparently written by a kamikaze pilot, it is surprisingly dull. Twenty pages in, no one has even died, and the pilot never mentions any combat at all. Despite these shortcomings, Siri begins to obsess over the diary's abrupt ending . . . and the riddle of why it ended up in his hands. Did the kamikaze pilot ever manage to get off the ground? To find out, he and Madame Daeng will have to hitch a ride south and uncover some of the darkest secrets of the Second World War.

» Have you read this book? We'd like to know what you think about it - write a review about The Delightful Life Of A Suicide Pilot book by Colin Cotterill and you'll earn 50c in Boomerang Bucks loyalty dollars (you must be a Boomerang Books Account Holder - it's free to sign up and there are great benefits!)


A Preview for this title is currently not available.
More Books By Colin Cotterill
View All