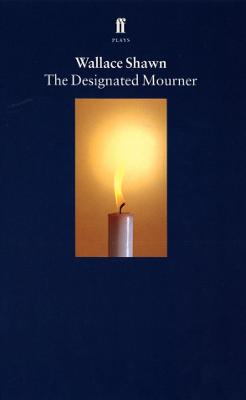 A daughter is tied to her brilliant father by a passionate bond. But then she is drawn towards an appealing man whose taste in cultural forms follows a disturbing path. The Designated Mourner is a harsh and poetic play about the pursuit of beauty in brutal times.

» Have you read this book? We'd like to know what you think about it - write a review about The Designated Mourner book by Wallace Shawn and you'll earn 50c in Boomerang Bucks loyalty dollars (you must be a Boomerang Books Account Holder - it's free to sign up and there are great benefits!)

Wallace Shawn's first play to be produced in New York was Our Late Night, directed by Andre Gregory at The Public Theater in 1975. A Thought in Three Parts was staged two years later by the Joint Stock Theatre Group in London, directed by Max Stafford-Clark. Shawn's next three plays - Marie and Bruce, Aunt Dan & Lemon, and The Fever - were all performed in New York at the Public Theater and in London at the Royal Court. Aunt Dan and Lemon was revived in London in 1999 at the Almeida Theatre, directed by Tom Cairns. Shawn's next play, The Designated Mourner, premiered at the National Theatre, London, with Mike Nichols, Miranda Richardson, and David de Keyser under the direction of David Hare, and was then performed in New York by Wallace Shawn, Deborah Eisenberg, and Larry Pine under the direction of Andre Gregory. In 2009, the Royal Court held a Wallace Shawn season, reviving Aunt Dan and Lemon and The Fever, and staging the premiere of Grasses of a Thousand Colours. Shawn wrote the libretto for Allen Shawn's opera The Music Teacher, directed by Tom Cairns for The New Group in New York (2006). Shawn translated Brecht's The Threepenny Opera (performed in New York at the Roundabout, Studio 54, directed by Scott Elliott). Wallace Shawn and Andre Gregory wrote and performed in the film My Dinner with Andre and Andre Gregory directed Shawn in Vanya on 42nd Street. Shawn has appeared as an actor in many films, including Manhattan, Clueless, Scenes from the Class Struggle in Beverly Hills,The Moderns, and The Wife. Shawn's Essays was published by Haymarket Books in 2009.

A Preview for this title is currently not available.
More Books By Wallace Shawn
View All