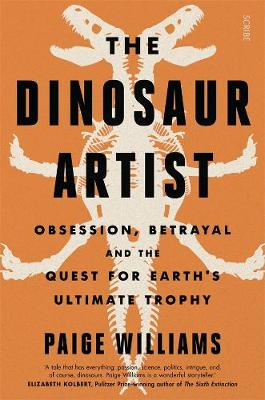 The Dinosaur Artist: obsession, betrayal, and the quest for Earth's ultimate trophy

Description - The Dinosaur Artist: obsession, betrayal, and the quest for Earth's ultimate trophy by Paige Williams

In 2012, a New York auction catalogue boasted an unusual offering- 'a superb Tyrannosaurus skeleton'. In fact, Lot 49135 consisted of a nearly complete T. bataar - a close cousin to the more-famous T. rex - that had been unearthed in Mongolia. At 2.4 metres high and 7.3 metres long, the specimen was spectacular, and the winning bid was over $1 million.

But had Prokopi gone too far this time? As the T. bataar went to auction, a network of paleontologists alerted the government of Mongolia to the eye-catching lot. An international custody battle ensued, with Prokopi watching as his own world unravelled.

The Dinosaur Artist is a stunning work of narrative journalism about humans' relationship with natural history, and about a seemingly intractable conflict between science and commerce. A story that stretches from Florida's Land O' Lakes to the Gobi Desert, The Dinosaur Artist illuminates the history of fossil collecting - a murky, sometimes risky business, populated by eccentrics and obsessives, where the lines between poacher and hunter, collector and smuggler, and enthusiast and opportunist can easily blur.

» Have you read this book? We'd like to know what you think about it - write a review about The Dinosaur Artist: obsession, betrayal, and the quest for Earth's ultimate trophy book by Paige Williams and you'll earn 50c in Boomerang Bucks loyalty dollars (you must be a Boomerang Books Account Holder - it's free to sign up and there are great benefits!)


A Preview for this title is currently not available.
More Books By Paige Williams
View All