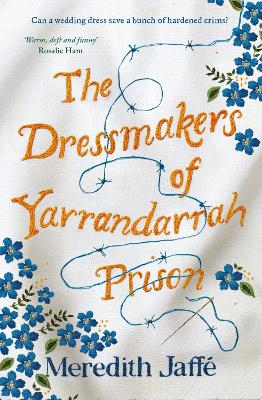 The Dressmakers of Yarrandarrah Prison

Description - The Dressmakers of Yarrandarrah Prison by Meredith Jaffe

Can a wedding dress save a bunch of hardened crims? The Full Monty meets Orange is the New Black in a poignantly comic story about a men's prison sewing circle.

'This is a deft and unlikely story in an uncommon setting about an estranged daughter, her jailed father and a very bad idea about a dress. It all makes for a warm, funny union of foes and a lovely encounter with what matters.' Rosalie Ham

Derek's daughter, Debbie, is getting married. He's desperate to be there, but he's banged up in Yarrandarrah Correctional Centre for embezzling funds from the golf club, and, thanks to his ex-wife, Lorraine, he hasn't spoken to Debbie in years. He wants to make a grand gesture - to show her how much he loves her. But what?

Inspiration strikes while he's embroidering a cushion at his weekly prison sewing circle - he'll make her a wedding dress. His fellow stitchers rally around and soon this motley gang of crims is immersed in a joyous whirl of silks, satins and covered buttons.

But as time runs out and tensions rise both inside and outside the prison, the wedding dress project takes on greater significance. With lives at stake, Derek feels his chance to reconcile with Debbie is slipping through his fingers ...

A funny, dark and moving novel about finding humanity, friendship and redemption in unexpected places.

'Overflowing with humour and heart. If you like a story about misfits making good, but with the added lustre of silk and satin, then this book is for you.' Natasha Lester

'This deliciously original, immersive and darkly funny novel is full of hope and heart. A refreshing take on the theme of redemption and second chances from an assured writer.' Joanna Nell

'Funny, heartfelt, and gorgeously written, The Dressmakers of Yarrandarrah Prison is a highly original and extremely enjoyable read' Better Reading

Book Reviews - The Dressmakers of Yarrandarrah Prison by Meredith Jaffe

» Have you read this book? We'd like to know what you think about it - write a review about The Dressmakers of Yarrandarrah Prison book by Meredith Jaffe and you'll earn 50c in Boomerang Bucks loyalty dollars (you must be a Boomerang Books Account Holder - it's free to sign up and there are great benefits!)

5 stars The Dressmakers of Yarrandarrah Prison is the third adult novel by Australian author, Meredith Jaffé. With two years left to serve on his seven-year sentence for embezzlement, Derek Brown is dismayed to learn that his only daughter, Debbie, is getting married in a mere seven months’ time. He clearly won’t be able to attend, but needs to do something significant to ensure their once-strong connection is not severed forever.

Debs wants only a small, intimate wedding, family and close friends, but her imperious mother, Lorraine is insisting on “the full catastrophe” and Debs is both weary of, and demoralised by, trying on dresses that do nothing to flatter her ample curves. If only she had eloped with Ian…

Derek has a mere $200 in his prison account, which won’t pay for a decent wedding gift, so he asks Jane for advice. Jane Watts volunteers every Thursday at Yarrandarrah Correctional Centre via the Connecting Threads program, teaching her Backtackers to sew, trying to give them meaning and purpose through quilting and embroidery. And there’s some genuine and varied talent amongst these burly, hardened criminals.

Between Jane and the other inmates, the (frankly ludicrous) suggestion that the group helps Derek make Debbie’s wedding dress is given serious consideration. Derek can only see drawbacks and pitfalls, but Jane maintains that this will be a personal gift, made by his own hand, that will truly demonstrate his love for her.

Jane tries to get Debbie’s measurements for the dress, but one encounter with Derek’s vindictive ex-wife sends her packing. Unwilling to abandon the project now that she has her stitchers on board, she is not entirely honest, deciding to wing it from the one view of the bride-to-be. She reasons her motives are pure, although she does have further plans for the dress…

Jane’s best friend and flatmate, Councillor Susannah Cockburn is the unsuccessful candidate in the recent mayoral election. When the new mayor announces plans to shut down Yarrandarrah’s library (currently the sole source of reading matter for the gaol), she decides to bring him down off his pedestal by stirring up a bit of community outrage.

Susannah also reasons that her “public good” end justifies her means, but a few rumours intended to get the prison community equally agitated have unanticipated consequences.

The premise of Jaffé’s story immediately draws the reader’s interest: the incongruity of the image, so well depicted, of a group of brawny prisoners reverently gathered around an exquisite wedding gown, cannot fail to delight.

Jaffé’s characters have depth and tons of appeal: even the hardest hearts will be wishing for obstacles to be overcome and Debbie to walk down the aisle wearing the Backtackers’ masterpiece. Minor characters, too, are given wise words and insightful observations.

As well as demonstrating the positive rehabilitation features of sewing classes in gaols (relief of boredom and tension, a sense of achievement and potential career direction), Jaffé’s story champions community libraries and touches on those addictive behaviours apart from drugs and alcohol, that are not always acknowledged for their destructive effects in society.

Contained within a wonderfully evocative cover, this is a thought-provoking, but also a funny and feel-good read. Guaranteed to be a favourite for 2021. This unbiased review is from an uncorrected proof copy provided by NetGalley and Harper Collins Australia.


A Preview for this title is currently not available.
More Books By Meredith Jaffe
View All