The Economic Consequences of the Euro: The Safest Escape Plan

Description - The Economic Consequences of the Euro: The Safest Escape Plan by Stefan Kawalec

This book presents a new narrative on the eurozone crisis. It argues that the common currency has the potential to kill the European Union, and the conventional wisdom that the eurozone can be fixed by a common budget and further political integration is incorrect.

The authors address key questions such as why the European Union and the single market have been successful, why the common currency poses a threat to European integration, and whether it is possible to either fix the eurozone or dissolve it while keeping the EU and the single market. Contrary to the view that it would be best if the Southern European countries left the eurozone first, the book makes the case that the optimal solution would be to start the process with the most competitive countries exiting first. The authors argue that a return to national currencies would be beneficial not only to the crisis-ridden southern countries, but also to France and Germany, which were the main promoters of the single currency. An organised unwinding of the euro area would be beneficial both for the European economy and for Europe's main trading partners.

The authors contend that to defend the euro at all costs weakens the European economy and threatens the cohesion of the European Union. If pro-European and pro-market EU leaders do not dismantle the eurozone, it will most likely be done by their anti-European and anti-market successors. If that happens, the European Union and the common market will be destroyed.

This book will be a useful and engaging contribution to the existing literature in the fields of macro, monetary and international finance and economics.

Other Editions - The Economic Consequences of the Euro: The Safest Escape Plan by Stefan Kawalec 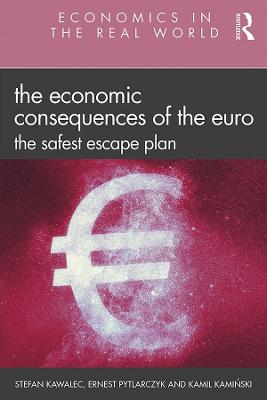 Book Reviews - The Economic Consequences of the Euro: The Safest Escape Plan by Stefan Kawalec

» Have you read this book? We'd like to know what you think about it - write a review about The Economic Consequences of the Euro: The Safest Escape Plan book by Stefan Kawalec and you'll earn 50c in Boomerang Bucks loyalty dollars (you must be a Boomerang Books Account Holder - it's free to sign up and there are great benefits!)


A Preview for this title is currently not available.
More Books By Stefan Kawalec
View All