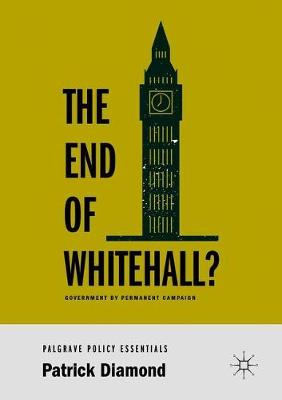 The End of Whitehall?: Government by Permanent Campaign

Description - The End of Whitehall?: Government by Permanent Campaign by Patrick Diamond

This Palgrave Policy Essential maps and assesses key changes in the Whitehall model over the last two decades. It argues that the traditional Whitehall model is being replaced by a system of 'New Political Governance' (NPG) centred on politicised campaigning; the growth of political advisory staff relative to the permanent civil service; the personalisation of bureaucratic appointments; and the creation of a government machine that is 'promiscuously partisan'. It provides a snapshot of the institutional changes that are unfolding at a critical moment, as Whitehall prepares to support Ministers in carrying out the Brexit process while addressing a series of long-term structural challenges from the demographic pressures of the ageing society to the impact of climate change. Austerity since 2010 has had a further transformative effect on Whitehall, with drastic reductions in the civil service workforce, the restructuring of government agencies, and a reconfiguration of the traditional roles and responsibilities of the permanent civil service.

Book Reviews - The End of Whitehall?: Government by Permanent Campaign by Patrick Diamond

» Have you read this book? We'd like to know what you think about it - write a review about The End of Whitehall?: Government by Permanent Campaign book by Patrick Diamond and you'll earn 50c in Boomerang Bucks loyalty dollars (you must be a Boomerang Books Account Holder - it's free to sign up and there are great benefits!)


A Preview for this title is currently not available.
More Books By Patrick Diamond
View All

The Crisis of Globalization: Democracy, Capitalism and Inequality in the Twenty-First Century
$37.59 $46.99