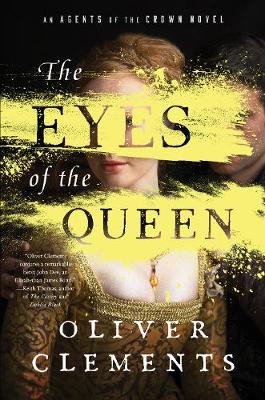 The Eyes of the Queen: A Novel

Description - The Eyes of the Queen: A Novel by Oliver Clements

In this first novel of the exhilarating Agents of the Crown series, a man who will become the original MI6 agent protects England and Her Majesty Queen Elizabeth I from Spain's nefarious plan to crush the Age of the Enlightenment.

After centuries locked in an endless cycle of poverty, persecution, and barbarity, Europe has finally emerged into the Age of Enlightenment. Scientists, philosophers, scholars, and poets alike believe this to be a new era of reason and hope for all. But the forces of darkness haven't completely dissipated, as Spain hunts and butchers any who dare to defy its ironclad Catholic orthodoxy.

Only one nation can fight the black shadow that threatens this new age, and that is Britain, now ruled by a brilliant young Queen Elizabeth I. But although she may be brave and headstrong, Elizabeth knows she cannot win this war simply by force of arms. After her armies have been slashed in half, her treasury is on its knees. Elizabeth needs a new kind of weapon forged to fight a new kind of war, in which stealth and secrecy, not bloodshed, are the means.

In this tense situation, Her Majesty's Secret Service is born with the charismatic John Dee at its head. A scholar, a soldier, and an alchemist, Dee is loyal only to the truth and to his Queen. And for her, the woman he's forbidden from loving, he is prepared to risk his life.

A visceral and heart-pumping historical thriller, The Eyes of the Queen is perfect for fans of Ken Follett and Dan Brown.

Buy The Eyes of the Queen: A Novel by Oliver Clements from Australia's Online Independent Bookstore, Boomerang Books.

Book Reviews - The Eyes of the Queen: A Novel by Oliver Clements

» Have you read this book? We'd like to know what you think about it - write a review about The Eyes of the Queen: A Novel book by Oliver Clements and you'll earn 50c in Boomerang Bucks loyalty dollars (you must be a Boomerang Books Account Holder - it's free to sign up and there are great benefits!)

A Preview for this title is currently not available.
More Books By Oliver Clements
View All