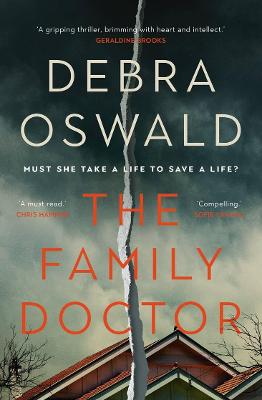 'The Family Doctor is a compelling thriller - fast-paced, gripping and frightening. But is more than that because it is a story that draws desperately needed attention to domestic abuse in this country, to institutional indifference, to the devaluing of women's lives. The Family Doctor is a cry for change.' Sofie Laguna, Miles Franklin Award-winning author of The Eye of the Sheep and Infinite Splendours

'Brilliant. So compelling on so many levels.' Chris Hammer, author of Scrublands

'Debra Oswald is always deft at capturing the nuances of female friendship and romantic attraction, but this time she brings them to a pitch of pulse-racing intensity. Delving into the dark world of domestic violence and society's abject failure to protect those most vulnerable, she has produced a gripping thriller, brimming with heart and intellect.' Geraldine Brooks, author of The Secret Chord

Paula is a dedicated suburban GP, who is devastated by the murder of a friend and her children by their estranged husband and father. Stacey and the children had been staying with her after fleeing his control, and Paula is haunted by the thought that she couldn't protect them when they most needed it. How had she missed the warning signs? How had she failed to keep them safe?

Not long after, a patient with suspicious injuries brings her anxious young son into Paula's surgery. The woman admits that her husband hurts her, but she's terrified to leave for fear of escalating the violence, and defeated by the consistent failures of the law to help her.

Can Paula go against everything she believes to make sure one woman is saved, one child spared? She isn't motivated by revenge. She's desperately trying to prevent a tragedy . . .

A riveting, provocative novel about women's fury, traumatic grief, new love, deep friendship, and the preciousness of life, The Family Doctor asks the questions: Should you cling to faith in a flawed system, or take control the only way you can? Can a good person justify taking a life to save a life?

'Mesmerising and heart-breaking. A perfect story for this moment in time.' Sarah Bailey, author of Where the Dead Go

'The Family Doctor brings urgent news, taking the reader into suburban battlegrounds kept private by the threat and actuality of violence. In crystal-clear prose, Debra Oswald unveils an all-too-believable world of love and loyalty stretched to the limit, with agonising consequences when the best people are forced to do the worst things. When is it justified to fight fire with fire? The moment you finish this novel you will want to find someone else who has read it and talk all night about the vital questions it raises.' Malcolm Knox, author of Bluebird

» Have you read this book? We'd like to know what you think about it - write a review about The Family Doctor book by Debra Oswald and you'll earn 50c in Boomerang Bucks loyalty dollars (you must be a Boomerang Books Account Holder - it's free to sign up and there are great benefits!)

5 stars “I don’t want to psychologise this. I don’t want to explain this away or analyse it in a way that drains the blood out of the primal bare fact of it: a man murdered his own children and their mother.”

The Family Doctor is the third adult novel by prize-winning Australian playwright and author, Debra Oswald. For twenty-five years, Stacey, Paula and Anita have been friends. Careers and life events have parted them at times, but now they are all, once again, in Sydney. For the last five months, Paula has shared her home with Stacey and her children as refuge from an abusive husband. That ends when the man enters her home, shoots dead his children and his estranged wife, and then turns the gun on himself.

After the initial shock that Paula and Anita suffer, their ongoing grief morphs into bewilderment and self-blame for missing signs, leading to discussion about how they could have helped Stacey hide, and then anger and indignance that this should ever be necessary. They even remark how men like that ought to be killed. Paula returns to her home determined to make the good memories eclipse the bad, and to her GP practice with an extra-vigilant eye on women and children.

But “Once an idea had been said aloud, even in a flippant way, it could establish its own blood supply in a person’s imagination”

As a court reporter, Anita funnels her rage into a long feature about how the system failed to protect women and children killed by men. That involves her attendance at the murder trial of John Santino, accused of pushing his girlfriend from an overpass into the path of a truck when she tried to leave him. She shares with Paula the daily progress of the trial, confident that this dangerous man will be put behind bars, and the heavily pregnant new girlfriend he parades daily in front of the media scrum will be safe.

Paula treats a young boy whose mother reluctantly admits she is under the control of such a man, a woman for whom the system is ineffective. What does Paula do when presented with the unexpected opportunity to remove the threat? Conflicting thoughts run through her brain: “It would be wrong to use her knowledge of the situation and her skills to intervene. It would be wrong, given her knowledge of the danger this woman faced, not to use her skills to intervene.”

Anita muses later “It was as if the malevolence from those men had oozed out of them, infecting the air, spreading until it turned a truly good person like Paula into a murderer.”

In her thought-provoking story, Oswald describes the common pattern that these murders by malevolent men follow, and examines what could happen when the system fails the vulnerable and the anger and despair push those who feel powerless into something they would ordinarily never consider doing. With a few small vignettes, Oswald so deftly paints her victims that the reader’s heart cannot help but ache for their loss, and the devastating effects of that loss on those who remain.

Her characters are believably flawed, their reactions entirely credible and their dialogue natural, if sometimes blackly funny. Oswald’s descriptive prose is wonderfully evocative: “A papery version of herself”, and she gives the reader a bit of romance, an exciting climax and a wholly realistic ending.

Good advice is to have some tissues ready for parts of this brilliantly-written tale. Powerful, topical and extremely relevant, this is an outstanding read. This unbiased review is from an uncorrected proof copy provided by Allen & Unwin.


A Preview for this title is currently not available.
More Books By Debra Oswald
View All