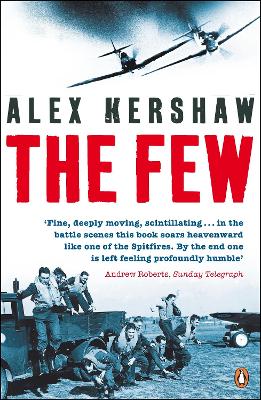 In the summer of 1940 a handful of volunteer pilots defied their country to fight when we needed them most. This is the story of their Battle of Britain.

In the early days of World War Two when Britain stood alone against the terror of Hitler's all-conquering Third Reich, her future hung in the balance; her defence in the hands of the Spitfires and Hurricanes of the Royal Air Force's Fighter Command. They were Churchill's Few. In defiance of their own country's strict neutrality laws, a handful of American adventurers flew with them. This is their story - and a fresh perspective on the greatest air battle the world has ever seen.

'Fine, deeply movingm scintillating...in the battle scenes this book soars heavenward like one of the Spitfires.' - Andrew Roberts, Sunday Telegraph

» Have you read this book? We'd like to know what you think about it - write a review about The Few: July-October 1940 book by Alex Kershaw and you'll earn 50c in Boomerang Bucks loyalty dollars (you must be a Boomerang Books Account Holder - it's free to sign up and there are great benefits!)


A Preview for this title is currently not available.
More Books By Alex Kershaw
View All