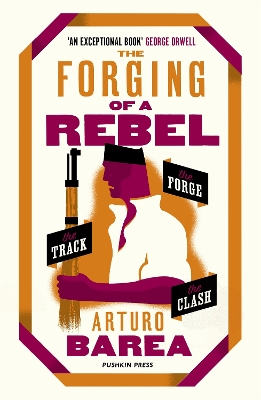 The Forging of a Rebel

Description - The Forging of a Rebel by Arturo Barea

Originally published in the late 1940s, Arturo Barea's astonishing Spanish trilogy is both the autobiography of a man and the biography of a nation during the first four decades of the twentieth century, one of the most crucial periods in Spain's long history.

Arturo Barea was born into a poor family in Madrid in 1897 and spent his early years moving between the social and economic worlds of his beloved and widowed mother and a well-to-do aunt. Spain had just lost the last of its rich colonial possessions and was burdened by a sick and corrupt monarchy, and Barea's description of Madrid in 'The Forge' - its slums and boulevards, beggars and children, and conflicting economic and political currents - is as gripping as it is fascinating. As with many of his generation, he developed bourgeois yearnings and became a prosperous businessman; yet he also became deeply concerned about the greed, corruption, and injustice he saw around him. His experience in the Spanish Army in Morocco during the bloody Riff War of the early 1920s, chronicled in 'The Track', affected him deeply and brought him back to Spain with a new perspective. 'The Clash' jumps ahead a decade to chronicle the events in Madrid during the Spanish Civil War, from 1935 to 1939, when Barea and his wife left Spain for good. His descriptions of people rising up to resist their aggressors are stunning, and brings home more poignantly and insightfully than any history the underlying conflicts, tensions, and complexities of the Civil War.

Individually, each of Barea's books is unforgettable; together they form a literary and historical masterpiece.

Buy The Forging of a Rebel by Arturo Barea from Australia's Online Independent Bookstore, Boomerang Books.

Book Reviews - The Forging of a Rebel by Arturo Barea

» Have you read this book? We'd like to know what you think about it - write a review about The Forging of a Rebel book by Arturo Barea and you'll earn 50c in Boomerang Bucks loyalty dollars (you must be a Boomerang Books Account Holder - it's free to sign up and there are great benefits!)