In Spain between 1936-1945, the Franco regime carried out one Europe's more brutal but less remembered programs of mass repression. Many were murdered by the regime's death squads, and in some areas Francoists also subjected up to 15% of the population to summary military trials. Here many suffered the death sentence or jail terms up to thirty years. Although historians have recognised the staggering scale of the trials, they have tended to overlook the mass participation that underpinned them. In contrast to the discussion in other European countries, little attention has been paid to the wide scale collusion in the killings and incarcerations in Spain. Exploring mass complicity in the trials of hundreds of thousands of defeated Republicans following the end of the Spanish Civil War, The Francoist Military Trials probes local Francoists' accusations whereby victims were selected for prosecution in military courts. It also shows how insubstantial and hostile testimony formed the bedrock of 'investigations', secured convictions, and shaped the harsh sentencing practices of Franco's military judges.
Using civil court records, it also documents how grassroots Francoists continued harassing Republicans for many years after they emerged from prison. Challenging the popularly prevalent view that the Franco regime imposed a police state upon a passive Spanish society, the evidence Anderson uncovers here illustrates that local state officials and members of the regime's support base together forged a powerful repressive system that allowed them to wage war on elements of their own society to a greater extent than perhaps even the Nazis managed against their own population.

Other Editions - The Francoist Military Trials: Terror and Complicity,1939-1945 by Peter Anderson 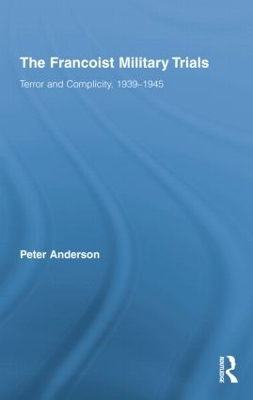 » Have you read this book? We'd like to know what you think about it - write a review about The Francoist Military Trials: Terror and Complicity,1939-1945 book by Peter Anderson and you'll earn 50c in Boomerang Bucks loyalty dollars (you must be a Boomerang Books Account Holder - it's free to sign up and there are great benefits!)


A Preview for this title is currently not available.
More Books By Peter Anderson
View All