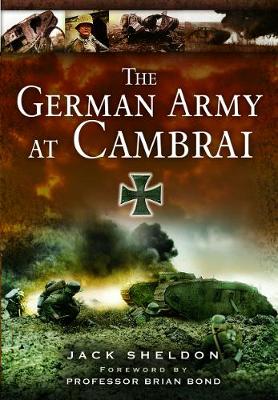 The German Army at Cambra.

Description - The German Army at Cambra. by Jack Sheldon

This latest German Army book by Jack Sheldon covers a shorter (three week) timeframe than his earlier works. After an introductory chapter tracing the development of the Hindenburg Line, the author concentrates on German aspects of the bitterly fought battle of Cambrai from 20 November to 6 December 1917. The narrative splits easily into two parts. First the defensive battle 20 29 November followed by the counter-attack which saw the German Army regain not only most of the ground lost in the opening phase but more besides. Detailed descriptions are given of the struggle for Flesquires Ridge and the see-saw battles for key terrain, including Bourlon Wood, as the German Army rushed reinforcements to the sectors under attack before we witness the German offensive. As with his other books full use is made of primary source material from the Munich Kriegsarchiv, the Hauptstaatsarchiv in Stuttgart, regimental histories and personal accounts. Of particular interest are the controversial interventions in operational matters of Ludendorf which were sharply criticised by Crown Prince Rupprecht. But for many the most fascinating aspect will be the experiences of the front line soldiers. AUTHOR: Jack Sheldon is now firmly established as the leading authority on the German Army in the First World War. A retired soldier he lives in France and is fully engaged researching and writing. His German Army on the Somme was a run-away success and he has built on his reputation with The German Army at Passchendaele and The German Army on Vimy Ridge. 32 b/w illustrations

Book Reviews - The German Army at Cambra. by Jack Sheldon

» Have you read this book? We'd like to know what you think about it - write a review about The German Army at Cambra. book by Jack Sheldon and you'll earn 50c in Boomerang Bucks loyalty dollars (you must be a Boomerang Books Account Holder - it's free to sign up and there are great benefits!)