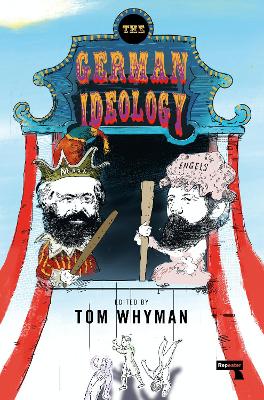 The German Ideology: A New Abridgement

Description - The German Ideology: A New Abridgement by Karl Marx

A new abridgement of Marx and Engels's 1846 reckoning with the philosophical tradition, edited and with an introduction by philosopher Tom Whyman.

Edited and with an introduction by philosopher Tom Whyman, this new abridged version The German Ideology sheds new light on one of the most difficult, disputed texts in Marx's oeuvre.

Written in 1846 and subsequently abandoned by Marx and Engels, only to be rescued in the 1930s by researchers in the USSR, The German Ideology is the high point of Marx's philosophical thought- a brilliantly insightful, still thrillingly radical work of materialist philosophical therapy. Yet there remains no wholly satisfactory stand-alone version in English, with only a heavily abridged 1970 edition edited by C.J. Arthur, or a facsimile edition taken from Vol. 5 of the Marx-Engels Collected Works, which does not include satisfactory scholarly notes, currently available.

In this new Repeater Classics edition, Tom Whyman seeks to remedy this. By expanding on generally-available abridgements to include the bulk of the section on Max Stirner, as well as amending the translation, adding notes and providing a new critical introduction, this new edition of The German Ideology will allow non-specialists to engage with this critical work for the first time.

At a time when interest in Marx's work is increasing, as people look for an alternative to our currently failing political system, this new edition of The German Ideology will bring Marx's most substantial vision of what communism might actually be like to a whole new audience.

» Have you read this book? We'd like to know what you think about it - write a review about The German Ideology: A New Abridgement book by Karl Marx and you'll earn 50c in Boomerang Bucks loyalty dollars (you must be a Boomerang Books Account Holder - it's free to sign up and there are great benefits!)


A Preview for this title is currently not available.
More Books By Karl Marx
View All

Grundrisse: Foundations of the Critique of Political Economy
$28.00 $35.00

Communist Manifesto; The Condition of the Working Class in England in 1844; Socialism: Utopian and Scientific
$15.99 $19.99