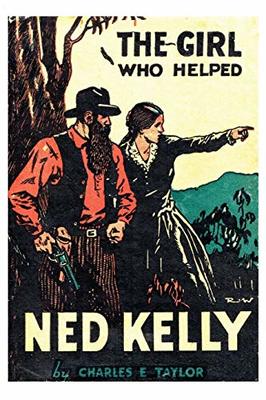 The Girl Who Helped Ned Kelly

Description - The Girl Who Helped Ned Kelly by Charles Taylor

Originally serialised in 1929, and out of print for 90 years, the book was written within the life spans of people who knew the Kellys - Taylor even interviewed Ned's brother Jim prior to writing the book, while Ellen Kelly had died only a few years before it was published. With that in mind, The Girl Who Helped Ned Kelly represents one of, if not the earliest romanticised fiction of Ned Kelly. With original illustrations, introduced by Gabriel Bergmoser.

"But accuracy is not what makes this book important and nor, realistically, is narrative. What makes it worthy of discussion is the fact that it represents a blithe fictionalisation of the Kelly story written at a time when the events were still very much within living memory. And despite Jim Kelly publicly stating his disgust towards the book, it would be far from the last. From Our Sunshine to True History of the Kelly Gang; the literary class might have evolved, but the fundamental ethos certainly hasn't. This story is our defining cultural myth, so writers and artists will always be drawn to create their own versions.

"The Girl Who Helped Ned Kelly, then, signifies the moment when writers started to twist the story to suit their own ends, in the process creating new interpretations that would ensure the legend was kept alive for generations to come. Whatever your opinion on the practice, that fact alone gives this book a place in the canon. And after being so inspired by it as a kid, it's gratifying to see it finally be republished, allowing a new generation to discover a noteworthy part of the slow transition from history to legend - along with an adventure story that retains the power to set a child's imagination alight and encourage an obsession spanning nearly two decades."

From the Introduction by Gabriel Bergmoser

» Have you read this book? We'd like to know what you think about it - write a review about The Girl Who Helped Ned Kelly book by Charles Taylor and you'll earn 50c in Boomerang Bucks loyalty dollars (you must be a Boomerang Books Account Holder - it's free to sign up and there are great benefits!)


A Preview for this title is currently not available.
More Books By Charles Taylor
View All

Reconstructing Democracy: How Citizens Are Building from the Ground Up
$24.45 $24.95

The Teaching of the Twelve Apostles: With Illustrations from the Talmud
$75.18 $83.53

The Wisdom of Ben Sira; Portions of the Book of Ecclesiasticus from Hebrew Manuscripts in the Cairo Genizah Collection Presented to the University of Cambridge by the Editors
$79.14 $87.93

Sayings of the Jewish Fathers: Comprising Pirqe Aboth and Pereq R. Meir in Hebrew and English,
$52.99 $58.88