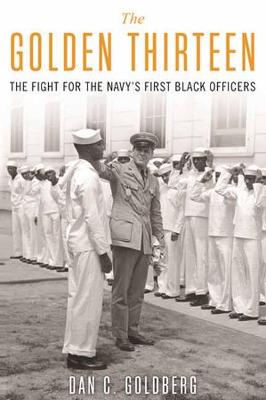 The Golden Thirteen: The Fight for the Navy's First Black Officers

Description - The Golden Thirteen: The Fight for the Navy's First Black Officers by Dan Goldberg

Through previously unpublished oral histories and original interviews with surviving family members, Dan Goldberg brings thirteen forgotten heroes away from the margins of history and into the spotlight. He reveals the opposition these men faced- the racist pseudo-science, the regular condescension, the repeated epithets, the verbal abuse and even violence. Despite these immense challenges, the Golden Thirteen persisted--understanding the power of integration, the opportunities for black Americans if they succeeded, and the consequences if they failed.

Until 1942, black men in the Navy could hold jobs only as cleaners and cooks. The Navy reluctantly decided to select the first black men to undergo officer training in 1944, after enormous pressure from ordinary citizens and civil rights leaders. These men, segregated and sworn to secrecy, worked harder than they ever had in their lives and ultimately passed their exams with the highest average of any class in Navy history.

In March 1944, these sailors became officers, the first black men to wear the gold stripes. Yet even then, their fight wasn't over- white men refused to salute them, refused to eat at their table, and refused to accept that black men could be superior to them in rank. Still, the Golden Thirteen persevered, determined to hold their heads high and set an example that would inspire generations to come.

In the vein of Hidden Figures, The Golden Thirteen reveals the contributions of heroes who were previously lost to history.

Book Reviews - The Golden Thirteen: The Fight for the Navy's First Black Officers by Dan Goldberg

» Have you read this book? We'd like to know what you think about it - write a review about The Golden Thirteen: The Fight for the Navy's First Black Officers book by Dan Goldberg and you'll earn 50c in Boomerang Bucks loyalty dollars (you must be a Boomerang Books Account Holder - it's free to sign up and there are great benefits!)


A Preview for this title is currently not available.
More Books By Dan Goldberg
View All