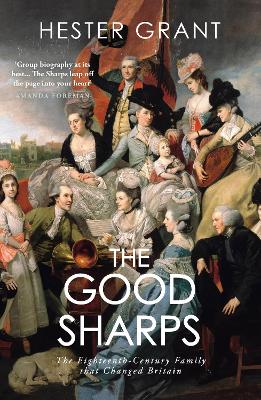 The Good Sharps: The Eighteenth-Century Family that Changed Britain

Description - The Good Sharps: The Eighteenth-Century Family that Changed Britain by Hester Grant

A vivid, moving biography of an extraordinary eighteenth-century family and their world

The enthralling story of an eighteenth-century family and their extraordinary achievements.

Four brothers, three sisters. Brought up in a Northumberland rectory and in the close of Durham Cathedral, the Sharps would achieve exalted positions at the heart of British society. In 1781, the celebrated painter Johan Zoffany put the final brush strokes on the luminous portrait that immortalised the siblings' rise, and their remarkable unity and passion for life.

Ambitious, free-thinking and courageous, the Sharps were pioneers in the major movements that defined the eighteenth century - from political reform and philanthropy to medicine and industry. John, an eminent priest, established a model welfare state at Bamburgh Castle and commissioned the world's first lifeboat; William became surgeon to George III; while James was a visionary inventor, canal promoter and engineer. Most famously of all, Granville, the youngest son, battled tirelessly as Britain's first great campaigner for the abolition of the slave trade. Despite the social strictures of their day, Elizabeth, Judith and Frances claimed significant independence, and played key roles in hosting the Sharps' famous musical parties on barges on the Thames.

In this vivid, moving biography, Hester Grant charts the siblings' shared journey to prominence, and explores the values and enduring bonds that inspired their success. The Good Sharps brings to life not just these men and women who realised that the future could be different, but also the new world they created.

» Have you read this book? We'd like to know what you think about it - write a review about The Good Sharps: The Eighteenth-Century Family that Changed Britain book by Hester Grant and you'll earn 50c in Boomerang Bucks loyalty dollars (you must be a Boomerang Books Account Holder - it's free to sign up and there are great benefits!)


A Preview for this title is currently not available.
More Books By Hester Grant
View All