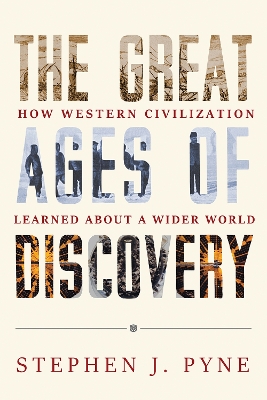 The Great Ages of Discovery: How Western Civilization Learned About a Wider World

Description - The Great Ages of Discovery: How Western Civilization Learned About a Wider World by Stephen J. Pyne

For more than 600 years, Western civilization has relied on exploration to learn about a wider world and universe. The Great Ages of Discovery details the different eras of Western exploration in terms of its locations, its intellectual contexts, the characteristic moral conflicts that underwrote encounters, and the grand gestures that distill an age into its essence.

Historian and MacArthur Fellow Stephen J. Pyne identifies three great ages of discovery in his fascinating new book. The first age of discovery ranged from the early 15th to the early 18th century, sketched out the contours of the globe, aligned with the Renaissance, and had for its grandest expression the circumnavigation of the world ocean. The second age launched in the latter half of the 18th century, spanning into the early 20th century, carrying the Enlightenment along with it, pairing especially with settler societies, and had as its prize achievement the crossing of a continent. The third age began after World War II, and, pivoting from Antarctica, pushed into the deep oceans and interplanetary space. Its grand gesture is Voyager's passage across the solar system. Each age had in common a galvanic rivalry: Spain and Portugal in the first age, Britain and France-followed by others-in the second, and the USSR and USA in the third.

With a deep and passionate knowledge of the history of Western exploration, Pyne takes us on a journey across hundreds of years of geographic trekking. The Great Ages of Discovery is an interpretive companion to what became Western civilization's quest narrative, with the triumphs and tragedies that grand journey brought, the legacies of which are still very much with us.

Book Reviews - The Great Ages of Discovery: How Western Civilization Learned About a Wider World by Stephen J. Pyne

» Have you read this book? We'd like to know what you think about it - write a review about The Great Ages of Discovery: How Western Civilization Learned About a Wider World book by Stephen J. Pyne and you'll earn 50c in Boomerang Bucks loyalty dollars (you must be a Boomerang Books Account Holder - it's free to sign up and there are great benefits!)


A Preview for this title is currently not available.
More Books By Stephen J. Pyne
View All