This thought-provoking book offers a new global approach to understand how four social class structures have rocked our political systems, to the extent that no politician or political party can exist today without claiming to be speaking on their behalf, and no politician can hope to win an electoral majority without building a coalition among these classes.

Based on a four-fold analysis - Urban and Liberal Creatives, Suburban Middle Class, White Working Class and the Millennials - this book shows that while many have focused on a supply-side vision of politics to explain the upheavals in our political party systems, a vision centred on demand - and the Weberian take on political parties as vehicles for class interests - is more compelling. In 2016, our political world was changed forever by the victories of Brexit in the UK and Donald Trump in the USA. Far from being confined to the Anglosphere however, changes have also rocked the political landscapes in Europe. As the crisis of 2008 has shaken the foundations of Western societies, shrinking the size of the previously all-powerful middle class, new classes have emerged, and with them a new political demand that new (or old) parties have tried to satisfy.

This book will be of key interest to political practitioners (politicians, advisors/consultants, journalists, political pundits, party builders, and government officials) and more broadly to academics, students and readers of European and Western politics, political sociology, party politics and political parties, and electoral demographics. 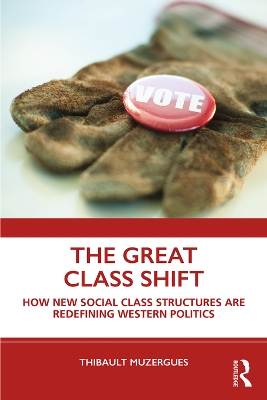 » Have you read this book? We'd like to know what you think about it - write a review about The Great Class Shift: How New Social Class Structures are Redefining Western Politics book by Thibault Muzergues and you'll earn 50c in Boomerang Bucks loyalty dollars (you must be a Boomerang Books Account Holder - it's free to sign up and there are great benefits!)


A Preview for this title is currently not available.
More Books By Thibault Muzergues
View All