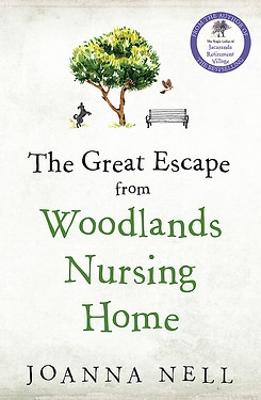 The joyous, charming and utterly irresistible new novel from the author of mega-bestseller The Single Ladies of Jacaranda Retirement VillageAt nearly ninety, retired nature writer Hattie Bloom prefers the company of birds to people, but when a fall lands her in a nursing home she struggles to cope with the loss of independence and privacy. From the confines of her 'room with a view' of the carpark, she dreams of escape.Fellow 'inmate', the gregarious, would-be comedian Walter Clements also plans on returning home as soon as he is fit and able to take charge of his mobility scooter.When Hattie and Walter officially meet at The Night Owls, a clandestine club run by Sister Bronwyn and her dog, Queenie, they seem at odds. But when Sister Bronwyn is dismissed over her unconventional approach to aged care, they must join forces -- and very slowly an unlikely, unexpected friendship begins to grow.Full of wisdom and warmth, The Great Escape from Woodlands Nursing Home is a gorgeously poignant, hilarious story showing that it is never too late to laugh -- or to love.Praise for Joanna Nell'Whip-smart dialogue, humour and sarcasm. A heart-warming story, extremely well written and highly addictive' Sun Herald'Lively and whimsical ... with some serious points to make about ageing, love, community and friendship' Sydney Morning Herald'This heartwarming story about growing old gracefully - and disgracefully ... is a funny, witty and thoroughly enjoyable read for all ages' Daily Telegraph » Have you read this book? We'd like to know what you think about it - write a review about The Great Escape from Woodlands Nursing Home book by Joanna Nell and you'll earn 50c in Boomerang Bucks loyalty dollars (you must be a Boomerang Books Account Holder - it's free to sign up and there are great benefits!)

5 stars “From years of careful observation Hattie had worked out how birds interacted. She’d learned their social hierarchies and their peccadilloes. She could read birds, and for decades, had reported their behaviour in what was essentially an ornithological gossip column or society page. Humans, on the other hand, remained an enigma.”

The Great Escape From Woodlands Nursing Home is the third novel by Australian author, Joanna Nell. Eighty-nine-year-old Hattie Bloom (Miss) is desperate to return to Angophora Cottage and its eponymous tree: on the fence-line, it’s the basis of a dispute with her new young neighbours, but a source of joy for Hattie, home to a pair of nesting Powerful Owls.

It’s a small irony that it’s Hattie’s concern for said owls, and her neighbours’ fixation with tree-lopping, that have landed her in Woodlands Nursing Home, until her hip heals (apparently the ladder was rotten). Hattie’s first attempt at escape fails when a traffic jam prevents the taxi progressing off the grounds.

Walter Clements, a feisty ninety, has also failed. The Tesla scooter he has had delivered sits in a corner of his room, the keys confiscated after the assessment, on which the DON insisted, ended rather badly. Casualties were a statue, a valuable eighteenth-century table, the OT’s foot and the shin of one Miss Hattie Bloom. Walter is incredulous: as a former driving instructor, he has every confidence in his driving skills; and the Tesla will be so handy for nipping down to the bottle shop, once he is permitted to use it.

At Woodlands, sleep does not come easily (if at all) to Hattie, but on her next sleepless night, two new faces present: the sympathetic face of the night nurse, Sister Bronwyn, and her elderly black Labrador, Queenie. Sister Bronwyn invites Hattie to join the Night Owls, and when she does, Hattie is quietly impressed with this nurse’s laterally-thought-out solution to elderly insomnia.

When Walter isn’t keeping his terminally ill friend Murray, company at night, he heads to the Day Room where the Night Owls gather; he’s hoping to get a smile out of Hattie Bloom but he might need to update his comic repertoire. He reminds Hattie of a kookaburra: “always laughing at his own jokes.” But his effort to impress leads to an incident that sees everyone’s favourite nurse lose her job.

Sister Bronwyn is replaced by an agency night nurse: “Not so youngish close up. Her hair a shade too yellow and her face obscured by thick makeup that gave her the appearance of an overworked painting. She had precise eyebrows that looked as if they’d been drawn on with a calligraphy pen, and conspicuous lips that looked as if they’d been caught in some sort of suction device.”

Without the Night Owls, the many Woodlands insomniacs are agitated. But between them, Hattie, Walter and Murray have confidence in their plan to get Sister Bronwyn reinstated. After all: “Everyone expects so little of us, expects us to be completely incapable. That’s our secret weapon.”

Nell’s third novel is another delight. Her characters will quickly charm the reader with their opinions, attitudes, insights, humour and wise words. As might be expected from the Nursing Home setting, the pace is fairly sedate, until the last fifth, when the reader’s heart might be thumping right along with Walter’s.

For any reader familiar with them, either through friends, family, or personal experience, Nell’s depiction of a care facility and its residents, what plagues them but also what brings pleasure, will definitely strike a chord, and attest to Nell’s extensive knowledge of her subject.

Without getting too graphic, Nell draws attention to the losses that afflict the aged, especially when they enter such a facility, whatever the quality: dignity, independence, freedom, familiar surroundings, convenience and more; and how they so easily feel invisible, unimportant, insignificant. Funny and poignant, this is a truly heart-warming read. This unbiased review is from an uncorrected proof copy provided by Hachette Australia.


A Preview for this title is currently not available.
More Books By Joanna Nell
View All