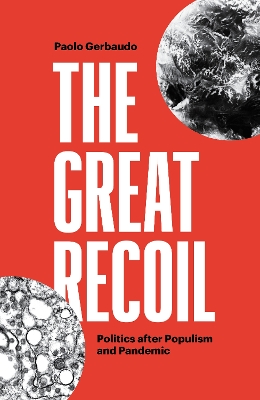 The Great Recoil: Politics after Populism and Pandemic

Description - The Great Recoil: Politics after Populism and Pandemic by Paolo Gerbaudo

In this era of economic crisis, social distress, and ecological threats, the term "populism" has come to sum up anxiety about our political future. While it is mostly associated with rightwing demagogues such as Donald Trump, Matteo Salvini and Jair Bolsonaro, various figures of the "post-crash Left", such as Bernie Sanders, Jeremy Corbyn and Pablo Iglesias have also been branded "populist", for the way they express that distrust of the elites and belief in ordinary people that have become key motifs of our zeitgeist.

Protect and Control suggests that we have entered a post-neoliberal and populist era, in which the populist idiom of sovereignty, protection and control has become hegemonic on both the Left and the Right. Weaving concepts from classics such as Plato, Machiavelli, Hobbes, Gramsci, Polanyi and Schumpeter with commentaries on the words and deeds of contemporary populist leaders, the book argues that populism is successful because it captures widespread anger at the chaos unleashed by globalisation and a popular demand for community and security that is politically ambiguous. Rather, than casting itself as anti-populist, the Left needs to articulate this idiom towards progressive ends, developing a post-global socialism committed to protecting the people and controlling the markets while re-asserting the power of the state.

Book Reviews - The Great Recoil: Politics after Populism and Pandemic by Paolo Gerbaudo

» Have you read this book? We'd like to know what you think about it - write a review about The Great Recoil: Politics after Populism and Pandemic book by Paolo Gerbaudo and you'll earn 50c in Boomerang Bucks loyalty dollars (you must be a Boomerang Books Account Holder - it's free to sign up and there are great benefits!)


A Preview for this title is currently not available.
More Books By Paolo Gerbaudo
View All