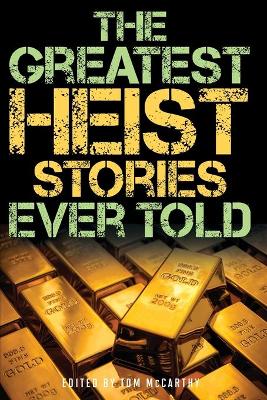 The Greatest Heist Stories Ever Told

Description - The Greatest Heist Stories Ever Told by Tom McCarthy

Crime does pay. At least for a while.
You'll see that quickly in these the ten compelling and true stories of brilliant plans, guile, and nerves of steel. The thieves awaiting you seem to have it all. They are clever, cool, and set at their goals with icy resolve. It takes a lot of guts and nerves of steel to do what they did and not fold under the pressure. After all, if those hard-wrought plans fail, they'll have plenty of time to think about what went wrong in prison.
Break into the poshest hotel in New York City and roust guests and security guards for the jewels and cash hidden in front-office deposit boxes under the tightest security? Hijack an airplane, demand a ransom and two parachutes, then disappear? Invent a device that allows you to record the combination of any bank vault, then break into bank vaults twice? Steal from a secret mob depository run by a boss known for his brutality? Why not?
The Greatest Heists Stories Ever Told will allow readers to appreciate the efforts that go into a truly magnificent heist. It is a celebration of stunning, well-planned and audacious capers that left police and armies of investigators looking for answers and scratching their heads.
Maybe that's what assures us that there will always be more heists. There is always that golden chance of getting away with it.
Among the stories included are:
The Lufthansa Heist
The Oddball Crew and the $17 Million Heist
The Last Good Heist
The Pierre Hotel Heist
Hijack! DB Cooper's Great Escape

» Have you read this book? We'd like to know what you think about it - write a review about The Greatest Heist Stories Ever Told book by Tom McCarthy and you'll earn 50c in Boomerang Bucks loyalty dollars (you must be a Boomerang Books Account Holder - it's free to sign up and there are great benefits!)


A Preview for this title is currently not available.
More Books By Tom McCarthy
View All