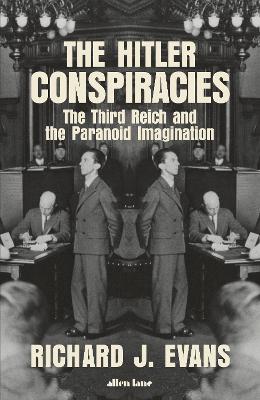 The Hitler Conspiracies: The Third Reich and the Paranoid Imagination

Description - The Hitler Conspiracies: The Third Reich and the Paranoid Imagination by Richard J. Evans

The idea that nothing happens by chance in history, that nothing is quite what it seems to be at first sight, that everything that occurs is the result of the secret machinations of malign groups of people manipulating everything from behind the scenes is as old as history itself. But conspiracy theories are becoming more popular and more widespread in the twenty-first century. Nowhere have they become more obvious than in revisionist accounts of the history of the Third Reich. Long-discredited conspiracy theories have taken on a new lease of life, given credence by claims of freshly discovered evidence and novel angles of investigation.This book takes five widely discussed claims involving Hitler and the Nazis and subjects them to forensic scrutiny- that the Jews were conspiring to undermine civilization, as outlined in 'The Protocols of the Elders of Zion'; that the German army was 'stabbed in the back' by socialists and Jews in 1918; that the Nazis burned down the Reichstag in order to seize power; that Rudolf Hess' flight to the UK in 1941 was sanctioned by Hitler and conveyed peace terms suppressed by Churchill; and that Hitler escaped the bunker in 1945 and fled to South America. In doing so, it teases out some surprising features these, and other conspiracy theories, have in common.This is a history book, but it is a history book for the age of 'post-truth' and 'alternative facts'- a book for our own troubled times.

Book Reviews - The Hitler Conspiracies: The Third Reich and the Paranoid Imagination by Richard J. Evans

» Have you read this book? We'd like to know what you think about it - write a review about The Hitler Conspiracies: The Third Reich and the Paranoid Imagination book by Richard J. Evans and you'll earn 50c in Boomerang Bucks loyalty dollars (you must be a Boomerang Books Account Holder - it's free to sign up and there are great benefits!)


A Preview for this title is currently not available.
More Books By Richard J. Evans
View All

Rethinking German History: Nineteenth-Century Germany and the Origins of the Third Reich
$73.25 $73.99