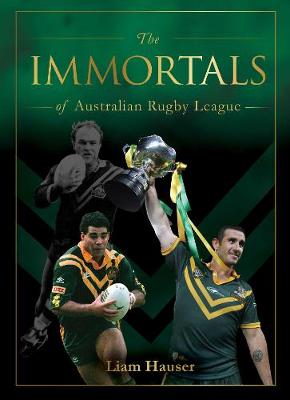 The Immortals of Australian Rugby League

Description - The Immortals of Australian Rugby League by Liam Hauser

The Immortals concept has become an established part of the Australian rugby league scene. It honours a very select group of former players regarded as the game's elite. Since 1981, when four former Australian Test captains were inducted as rugby league's first Immortals, a further nine identities have been added to the prestigious group. These players weren't just high achievers and standout performers, but also influential identities who set a new benchmark and changed the way rugby league is played.

The Immortals of Rugby League delves into the illustrious careers of the 13 individuals who have attained Immortal status. The book describes their attributes and characteristics, in addition to their achievements and accomplishments at club, state and international level. The glory, triumphs and heroics, mixed with setbacks, controversies and disappointments, reflect their unique standing in rugby league. With career statistics, personal details and a range of photographs included, readers can enjoy an array of information about rugby league's Immortals.

» Have you read this book? We'd like to know what you think about it - write a review about The Immortals of Australian Rugby League book by Liam Hauser and you'll earn 50c in Boomerang Bucks loyalty dollars (you must be a Boomerang Books Account Holder - it's free to sign up and there are great benefits!)