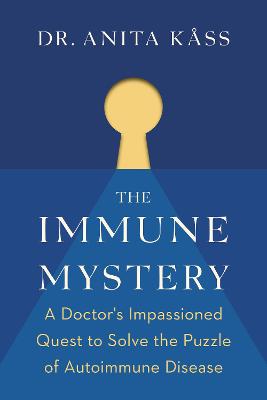 The Immune Mystery: A Doctor's Impassioned Quest to Solve the Puzzle of Autoimmune Disease

Description - The Immune Mystery: A Doctor's Impassioned Quest to Solve the Puzzle of Autoimmune Disease by Dr Anita Kass

The remarkable story of how one female doctor beat the odds to discover a potentially groundbreaking treatment for autoimmune diseases.

More than 20 million Americans have autoimmune diseases, which occur when the immune system attacks the body. Autoimmune diseases are often misdiagnosed by doctors and overlooked by medical researchers. Almost all affect women more often than men.

The Immune Mystery follows Anita Kass's quest to solve the autoimmune puzzle, beginning with the premature death of her mother, who developed rheumatoid arthritis shortly after giving birth to Anita. As a child, Anita vowed to study the illness and one day find a cure.

Becoming a respected doctor and researcher, Anita devoted herself to studying auto-immune disorders like rheumatoid arthritis, lupus, and multiple sclerosis. Why do so many autoimmune diseases start to show symptoms during and after childbirth, perimenopause, and menopause? Could autoimmune diseases be linked to our changing hormones?

Despite the groundbreaking nature of her research, Anita had to fight for her ideas against the conventional wisdom and casual sexism of the medical industry -- even as she made a discovery that earned her a record-breaking US$95 million pharmaceutical deal.

A compelling blend of incredible determination and cutting-edge science, The Immune Mystery changes the way we think about autoimmune diseases. Anita offers solace to patients struggling with questions about their health, and introduces a powerful new voice in medical storytelling.

Book Reviews - The Immune Mystery: A Doctor's Impassioned Quest to Solve the Puzzle of Autoimmune Disease by Dr Anita Kass

» Have you read this book? We'd like to know what you think about it - write a review about The Immune Mystery: A Doctor's Impassioned Quest to Solve the Puzzle of Autoimmune Disease book by Dr Anita Kass and you'll earn 50c in Boomerang Bucks loyalty dollars (you must be a Boomerang Books Account Holder - it's free to sign up and there are great benefits!)