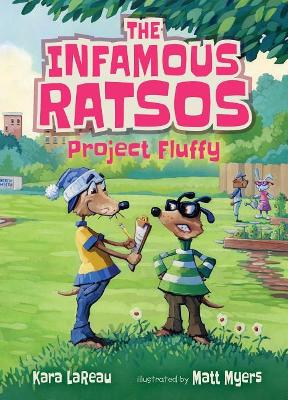 Louie Ratso tries to help super-cool Chuck Wood win the heart of his friend Fluffy Rabbitski in the third installment of the Infamous Ratsos.

Chuck Wood is the most popular kid in school, and Louie Ratso can't believe that Chuck has asked him for help! Chuck likes Louie's friend Fluffy Rabbitski, and he wants Louie to help him get Fluffy to notice him. As for Ralphie Ratso, he can't believe that his brother wants to spend all his time with Chuck instead of with him. Meanwhile, despite Louie and Chuck's attempts to get Fluffy's attention, she has eyes for only one thing: her garden. But there may be hope. As their father, Big Lou, tells his boys, the best way to get someone to like you is to show that you're interested in what they like. After all, that's how Big Lou won over Mama Ratso years ago. Can Louie help Chuck find a way into Fluffy's heart? And will Ralphie find a way to let his brother know how much he misses him?

Other Editions - The Infamous Ratsos: Project Fluffy by Kara LaReau » Have you read this book? We'd like to know what you think about it - write a review about The Infamous Ratsos: Project Fluffy book by Kara LaReau and you'll earn 50c in Boomerang Bucks loyalty dollars (you must be a Boomerang Books Account Holder - it's free to sign up and there are great benefits!)


A Preview for this title is currently not available.
More Books By Kara LaReau
View All