Irish troops had fought for Louis XIV in the 1670s, under Irish officers who had little choice but to fight in foreign service, with the blessing of Charles II. With the accession of James II, and the religious politics of who might earn the English crown, they became embroiled in the Jacobite succession crisis, fighting in Ireland, then sent to France under Lord Mountcashel in 1689. With the fall of Limerick in 1691, Patrick Sarsfield led the second 'flight' of 'Wild Geese' to the continent, to fight in a war for the French, against the Grand Alliance of Europe, in the vain hope that their loyalty might warrant French support in a return to Ireland under a Jacobite king. From the Nine Years War, through the War of the Spanish Succession, and beyond, their descendents would be present at Fontenoy, Culloden and in the Americas, forever destined to fight for a cause and land which had changed beyond recognition. D.P.Graham explains the origins of the brigade and its regiments, the personalities who led them and formed their reputation, and the circumstances of their final dissolution in the aftermath of French Revolution. AUTHOR: D.P. Graham has an MA in History and is working toward a PhD. He has lectured on various aspects of Irish military history, and lives in Co. Antrim. He is the author of Enniskillen and The Battle of Newtownbutler, 1689; Brothers in Arms, The Hamiltons in Ireland, England and France, 1610-1719; and Lord Mountcashel: Irish Jacobite General. 16 b/w illustrations 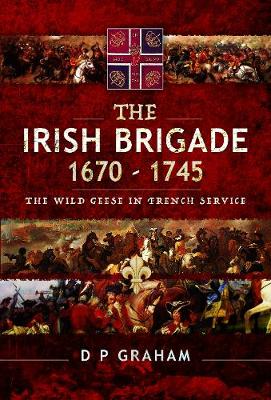 » Have you read this book? We'd like to know what you think about it - write a review about The Irish Brigade 1670-1745: The Wild Geese in French Service book by D. P. Graham and you'll earn 50c in Boomerang Bucks loyalty dollars (you must be a Boomerang Books Account Holder - it's free to sign up and there are great benefits!)


A Preview for this title is currently not available.
More Books By D. P. Graham
View All