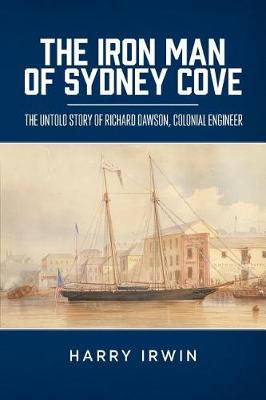 "ONE FARTHING REWARD" trumpeted ironmaster Richard Dawson in an 1859 advertisement seeking information about his nephew, who had absconded from his indented service. Richard "Dicky" Dawson, Sydney merchant and engineer, a well-liked, highly-respected and fair man but a hard taskmaster, was Australia's first important iron founder. From the 1830s, his Australian Foundry at Sydney Cove near Circular Quay produced a wide range of agricultural, architectural, marine and goldfields iron castings and machinery, including steam engines, and made a major early contribution to colonial development by importing iron-trade technologies and products of England's Industrial Revolution. His 'manufactory' made innovative repairs to sailing and steam ships visiting Port Jackson. He also had coastal and island shipping interests, and his Lord Howe Island trading station venture supplied provisions to visiting local, European and American whaling vessels. Myriad challenges confronted this determined colonial entrepreneur. He adopted inventive engineering and commercial solutions to overcome them, and thrived, far from his Bristol home and Scottish roots.

» Have you read this book? We'd like to know what you think about it - write a review about The Iron Man of Sydney Cove: The Untold Story of Richard Dawson, Colonial Engineer book by Harry Irwin and you'll earn 50c in Boomerang Bucks loyalty dollars (you must be a Boomerang Books Account Holder - it's free to sign up and there are great benefits!)


A Preview for this title is currently not available.
More Books By Harry Irwin
View All

The Hum of the Wheels, the Roar of the Crowd: Five Cycling Shaw Brothers from Woolloomooloo
$39.15 $39.95