A moving story of love, loss and survival against the odds by bestselling author of The Last of the Bonegilla Girls, Victoria Purman.

War has engulfed Europe and now the Pacific, and Australia is fighting for its future. For spinster Flora Atkins, however, nothing much has changed. Tending her dull office job and beloved brother and father, as well as knitting socks for the troops, leaves her relatively content. Then one day a stranger gives her brother a white feather and Flora's anger propels her out of her safe life and into the vineyards of the idyllic Mildura countryside, a member of the Australian Women's Land Army.

There she meets Betty, a 17-year-old former shopgirl keen to do her bit for the war effort and support her beloved, and the unlikely Lilian, a well-to-do Adelaide girl fleeing her overbearing family and theworld's expectations for her. As the Land Girls embrace their new world of close-knit community and backbreaking work, they begin to find pride in their roles. More than that, they start to find a kind of liberation. For Flora, new friendships and the singular joy derived from working the land offer new meaning to her life, and even the possibility of love.

But as the clouds of war darken the horizon, and their fears for loved ones - brothers, husbands, lovers - fighting at the front grow, the Land Girls' hold on their world and their new-found freedoms is fragile. Even if they make it through unscathed, they will not come through unchanged...

Other Editions - The Land Girls by Victoria Purman 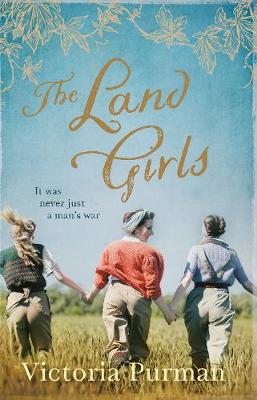 » Have you read this book? We'd like to know what you think about it - write a review about The Land Girls book by Victoria Purman and you'll earn 50c in Boomerang Bucks loyalty dollars (you must be a Boomerang Books Account Holder - it's free to sign up and there are great benefits!)

5 stars The Land Girls is the third stand-alone novel by best-selling Australian author, Victoria Purman. It’s 1942 and, except for reserved occupations, the young men of Australia have been sucked into the war machine, serving in Europe and Asia. The void this leaves on the country’s farms is a threat to food production, so women step into the breach in the form of the Australian Women’s Land Army: the Land Girls.

The women who step up come from many different backgrounds, and have different reasons for doing so. Young Frank Atkins is serving somewhere in Asia and his brother is unable to, so thirty-year-old Flora Atkins decides to leave the office job where she’s not appreciated to contribute to the war effort.

When her best friend and next-door-neighbour, Michael follows his brother and enlists in the AIF, seventeen-year-old Betty Brower feels she can make a better contribution picking fruit that selling cosmetics in Woolies.

Lilian’s well-to-do mother believes that at eighteen she should be taking more responsibility instead of wasting time at balls and parties. She knows that in her parents’ eyes she’ll never be able to match her sister Susan, an Army doctor in Egypt, but when her sweetheart begins training as an RAAF pilot, she wants to do something more useful than rolling bandages.

The women are provided with uniforms, briefed on how to behave and what is expected of them. They are paid a generous 30 shillings a week on top of meals and board, and generally made welcome into the country towns by residents and farmers who appreciate the sacrifice they have made. This is not exclusively the case: some are unconvinced of their ability and their genuine good intentions.

Despite warnings, many of the Land Girls are dismayed by both how physically exhausting the work is and how homesick they soon are, missing far off friends and family, aching for their sweethearts and husbands fighting in the war, desperate for word of their fate.

While on the land, these women learn a great deal about crop husbandry and about themselves; they attain maturity and self-confidence, they learn to support each other and find friendship, and, occasionally, find love. Many leave with a wholly unexpected love of the countryside.

At a time when, unlike today, communications were anything but instant, when the telephone was not a ubiquitous but a rare thing, Purman demonstrates the importance of letters: letters that brought news both good and bad (although the worst news usually came by telegram); letters from distant loved ones that took weeks, nay months, to arrive, with bits redacted, but letters that reassured the receiver they were still alive, still loving and loved.

Purman’s characters are easy to love and care about. Her story has joy and heartache, but ultimately, it also has hope. Her extensive research is apparent on every page. (A good proportion of the novel is poorly formatted, but this will likely be corrected for the final version and barely affects the reading experience) An interesting and heart-warming read. This unbiased review is from an uncorrected proof copy provided by NetGalley and Harlequin Australia.