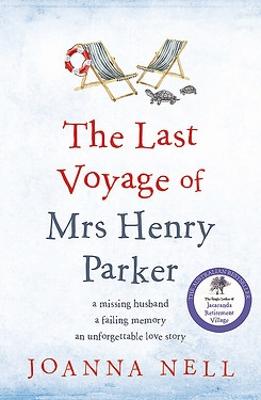 As the wife of retired ship's doctor Dr Henry Parker, Evelyn is living out her twilight years aboard the Golden Sunset. Every night she dresses for dinner - gown, tiara, runners - and regales her fellow passengers with stories of a glamorous life travelling the world in luxury as well as showing off her superior knowledge of everything from ships' customs to biographical details of her heroine, Florence Nightingale. The crew treat her with deference. And forbearance.But when Henry goes missing, Evelyn sets off to search every part of the grand ocean liner to find him, casino, nightclub and off-limits areas included. Misadventures are had, new friends are made, scandalous behaviour noted - all news to Evelyn. If only she could remember the events of the night before as clearly as she can recall the first time she met Henry on a passage from England to Australia in 1953 and fell in love, abandoning her dreams to become a midwife to be a wife instead - and the long-ago painful events that left Evelyn all at sea.Why is it so hard to remember some things and so hard to forget others? And where is Henry? The Last Voyage of Mrs Henry Parker is a love letter to the memories we make over the course of a lifetime, and how the heart remembers what matters, even when the mind has long forgotten.'Whip-smart dialogue, humour and sarcasm add a whole new dimension to Mrs Henry Parker and her last voyage. A heart-warming story, extremely well written and highly addictive' Sun Herald 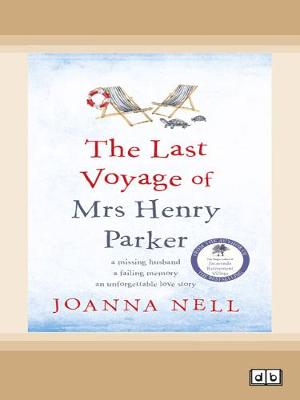 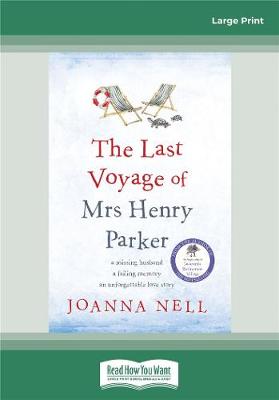 » Have you read this book? We'd like to know what you think about it - write a review about The Last Voyage of Mrs Henry Parker book by Joanna Nell and you'll earn 50c in Boomerang Bucks loyalty dollars (you must be a Boomerang Books Account Holder - it's free to sign up and there are great benefits!)

“Home. Evelyn considered the word. What did home mean? The place where one lived? Not bricks and mortar, certainly, for theirs had been made of steel and glass. If home meant family, then this ship and all its crew and passengers were the only home she could remember. But if home was the place where she and Henry were together, side by side as man and wife, then she was already homeless.”

The Last Voyage of Mrs Henry Parker is the second novel by Australian GP, author (and former ship’s doctor), Joanna Nell. As Evelyn Parker joins another cruise on the Golden Sunset, she recalls boarding the liner for the maiden voyage as wife of the ship’s doctor. She can’t see him right now, but Dr Henry Parker will turn up soon, she’s assured by the stewards who look after her so well. Cruising on this ship has been their life for the last twenty years, so everyone knows them well.

But Henry is proving elusive: he’s left a breakfast tray in the cabin, but he’s not there now. And someone has left her a parcel: a pair of lace-ups that turn out to be very comfortable, and will be just the thing if she’s going to search the ship for Henry, not to mention doing her daily laps of the boat deck.

The young woman who says she is the ship’s doctor (just a girl!) would like a chat; Evelyn avoids that by heading for Mindful Colouring (whatever that is) in the Library. As she colours in a bird (An owl? An eagle? A seagull?) a chatty lady (Nola) and her agreeable husband (Frank) are very interested to hear all about how she first met Henry, and the many cruises they have done.

Later, she can’t always remember their names, but she likes them: “Evelyn still couldn’t think who these people were. One generous, verging on wasteful with words, the other so frugal. Whoever they were they belonged together, she decided, their talking budget well balanced.”

Everything she needs for her search is in her handbag: “Evelyn opened her handbag, hoping to find a clue. The clasp sprang open, revealing all manner of objects. The tiara. An unopened letter. A fountain pen and a spare bottle of blue-black Quink. Mints. Coleridge. A wooden carving of a turtle and its baby.” A trained nurse, Evelyn often quotes Florence Nightingale, as well as Henry’s favourite, The Rime of the Ancient Mariner, from memory.

The narrative switches between the present day, as an often-confused Evelyn searches for Henry, and the past, from 1953 onwards, as Evelyn remembers or relates the events of the life she shared with him. Her recall of much of the past is crystal clear, but sometimes: “Evelyn rummaged through the untidy drawer where her thoughts and memories lay tangled in bits of old string, paperclips and spare batteries. She simply couldn’t find what she was looking for, the words skimming across the surface of her comprehension.”

Evelyn is a wonderful character: sometimes reserved or critical, but she also gives a lot of joy and is often just an anxious old lady about whom it’s difficult not to care. “She liked it when Nola talked, even if she couldn’t make sense of the words. Silence, she decided, was far more frightening. It only made her worries and fears easier to hear.”

Nell’s portrayal of senile dementia is an insightful and sensitive one: Evelyn’s thought processes, and the utterances that ensue, show just how poor memory, distraction, confusion and occasionally flawed logic can lead to seemingly meaningless sentences.

She often gives the reader a wonderful turn of phrase: “Back in the present, the woman was talking again, a conveyor belt of words and sentences that Evelyn could barely keep up with” and “Her thoughts scattered like a shoal of fish from a shark” and “When the doors opened, however, it was full of soft-bodied passengers pressed together like marshmallows in a jar. She tutted her judgement. She blamed elasticated clothing for the overcrowding in modern-day elevators” are examples.

There’s plenty of humour in this novel: lots of laugh-out-loud moments; but what makes this a really heart-warming read is the care and patience that all the ship’s crew show a clearly-demented Evelyn on her final cruise. They all know and love her, even if she often can’t remember their names, despite her clever mnemonics. And it’s Evelyn’s interactions with some of the support cast that may cause a lump in the throat and tears to well in the final chapters. Funny and feel-good, a wonderful read. This unbiased review is from an uncorrected proof copy provided by NetGalley and Hachette Australia


A Preview for this title is currently not available.
More Books By Joanna Nell
View All