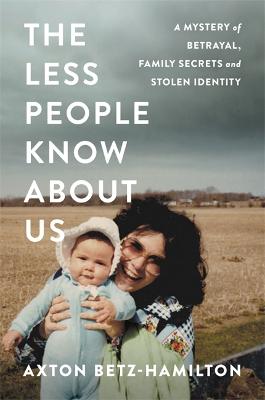 The Less People Know About Us: A Mystery of Betrayal, Family Secrets, and Stolen Identity

Description - The Less People Know About Us: A Mystery of Betrayal, Family Secrets, and Stolen Identity by Axton Betz-Hamilton

Axton Betz-Hamilton grew up in small-town Indiana in the early '90s. When she was 11 years old, her parents both had their identities stolen. Their credit ratings were ruined and they were constantly fighting over money. This was before the age of the Internet, when identity theft became more commonplace, so authorities and banks were clueless and reluctant to help Axton's parents.Axton's family switched PO Boxes, changed all of their personal information and moved to different addresses but the identity thief followed them wherever they went. Convinced that the thief had to be someone they knew, Axton and her parents completely cut off the outside world, isolating themselves from friends and family. Axton learned not to let anyone into the house without explicit permission and once went as far as chasing a plumber off their property with a knife. She had panic attacks throughout her formative years and often became physically sick with anxiety and quarantined behind the closed curtains in her childhood home. She began starving herself at a young age in an effort to blend in - her clothes, hair, makeup and weight could be nothing short of perfect or she would be scolded by her mother, who had become paranoid and consumed by how others perceived the family.Years later, her parents marriage still shaken from the theft, Axton discovered that she, too, had fallen prey to the identity thief but by the time she realised, she was already thousands of dollars in debt and her credit was ruined. After her mother's death, Axton's father found a box filled with pay stubs that listed his wife's first name but a different last name; copies of Axton's birth certificate; denial of application letters for various checking accounts; properties with other men. Axton and her father quickly came to realise that the identity thief was her mother all along. THE LESS PEOPLE KNOW ABOUT US is Axton's attempt to untangle the intricate web of her mother's lies and to understand why and how her mother could have inflicted such pain upon the two people closest to her. Axton will present a candid, shocking and redemptive story that will provide clarity and comfort for others in similarly unfortunate circumstances, and reveal her courageous effort to grapple with a parent who broke the unwritten rules of love, protection, and family.

Buy The Less People Know About Us: A Mystery of Betrayal, Family Secrets, and Stolen Identity by Axton Betz-Hamilton from Australia's Online Independent Bookstore, Boomerang Books.

Book Reviews - The Less People Know About Us: A Mystery of Betrayal, Family Secrets, and Stolen Identity by Axton Betz-Hamilton

» Have you read this book? We'd like to know what you think about it - write a review about The Less People Know About Us: A Mystery of Betrayal, Family Secrets, and Stolen Identity book by Axton Betz-Hamilton and you'll earn 50c in Boomerang Bucks loyalty dollars (you must be a Boomerang Books Account Holder - it's free to sign up and there are great benefits!)