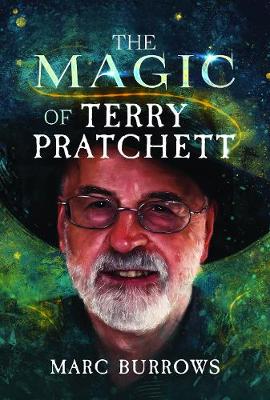 The Magic of Terry Pratchett

Description - The Magic of Terry Pratchett by Marc Burrows

The Magic Of Terry Pratchett is the first full biography of Sir Terry Pratchett ever written. Sir Terry was Britain's best-selling living author*, and before his death in 2015 had sold more than 85 million copies of his books worldwide. Best known for the Discworld series, his work has been translated into 37 languages, and performed as plays on every continent in the world, including Antarctica. Journalist, comedian and Pratchett fan Marc Burrows delves into the back story of one of UK's most enduring and beloved authors, from his childhood in the Chiltern Hills, to his time as a journalist, and the journey that would take him - via more than sixty best-selling books - to an OBE, a knighthood and national treasure status. The Magic Of Terry Pratchett is the result of painstaking archival research alongside interviews with friends and contemporaries who knew the real man under the famous black hat, helping to piece together the full story of one of British literature's most remarkable and beloved figures for the very first time. * Now disqualified on both counts. AUTHOR: Marc Burrows is a London based writer, stand up comic and musician, writing regularly for The Guardian, Observer, Drowned in Sound, The Quietus and more. In 2014 he compiled and edited I Think I Can See Where You're Going Wrong, a collection of the funniest comments from the Guardian website, published by Faber and Faber. People got it for Christmas and read it on the loo, and he was happy with that. He has performed several one-man shows at the Edinburgh Fringe, the most recent of which, Mind Your Head, focused on a lifetime of struggles with his mental health. He also plays bass in the cult punk band, The Men That Will Not Be Blamed For Nothing and can be found regularly touring the UK and USA. He discovered the works of Terry Pratchett when his Mum lent him The Colour of Magic as an eleven-year-old, and spent the next week annoying his classmates by reading the funniest bits out loud. He has never looked back. 32 b/w illustrations

Book Reviews - The Magic of Terry Pratchett by Marc Burrows

» Have you read this book? We'd like to know what you think about it - write a review about The Magic of Terry Pratchett book by Marc Burrows and you'll earn 50c in Boomerang Bucks loyalty dollars (you must be a Boomerang Books Account Holder - it's free to sign up and there are great benefits!)

4.5?s “From the young boy living in a cottage with no electricity to the best-selling author living in a 500-year-old manor house with its own grounds, his approach to money never changed: ‘I’m not a rich man,’ he told The Scotsman in 2012, ‘I’m a poor man with a shitload of money.’”

The Magic of Terry Pratchett, by British journalist and author, Marc Burrows, is a fairly brief (360p) biography of a man who has brought joy to countless readers, Sir Terry Pratchett. Burrows takes the reader on a journey through Pratchett’s life: his early childhood and the sound guidance and unfailing support his parents provided, especially when his school experience was found wanting.

When Burrows describes Pratchett’s schooling during the sixties and seventies, it will likely strike a chord with many of Pratchett’s vintage, but the deficit was amply supplemented by the Beaconsfield library, where he became a volunteer to give him unlimited access to books. He boasted that at one stage he had 143 books on loan at the same time.

Burrows details Pratchett’s early career as a journalist and remarks on how this contributed to his literary skills, and his fairly short-lived position in Public Relations, which also furnished him with material for his writing: “Watching as petty bureaucracy and stubborn adherence to the rules scuppered common sense was a useful crash course in human nature.”

Pratchett’s publishing journey is analysed: from his first novel, published at the age of twenty-three, through to the final books published posthumously, Burrows comments on Pratchett’s writing style and content, and how it reflected his life. He describes the seemingly unlikely but enduring friendship with Neil Gaiman, which led to their collaboration on Good Omens, and his tight control over Discworld merchandising and adaptation to other media: stage, film, TV, games.

His unfailing connection with fans is a constant, even late in his career “His relationship with his fanbase was still that of a genre writer, and at events, including the posh parties thrown for this or that Discworld anniversary, he would always prefer to spend time chatting with fans – a number of whom he insisted should always be invited – than with press or industry types.” Examples of his “pay forward” mindset are given.

Pratchett’s handling of his diagnosis with a variant of Alzheimer’s disease is described, his determination to continue writing, and his role as ambassador for dementia conditions, as well as his strong support for “right to die” legislation. The description of his own death is likely to bring a tear to the eye and, in all, this is a book that will have readers dusting off their Terry Pratchett novels for reading/rereading.

The Magic of Terry Pratchett? Clearly, the secret to Pratchett’s success with his inventive and hugely entertaining books, apart from being endowed with a spectacular imagination, is to be a voracious reader, from an early age, and to read very widely. Working as a journalist doesn’t hurt, either, nor does being brought up by parents who instil a strong work ethic. An interesting, informative and moving read. This unbiased review is from an uncorrected proof copy provided by NetGalley and Pen and Sword.


A Preview for this title is currently not available.
More Books By Marc Burrows
View All