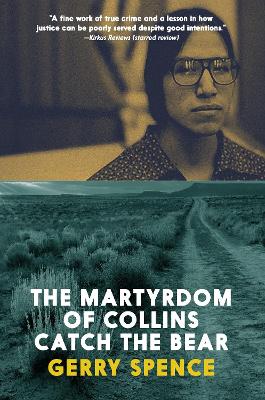 The Martyrdom Of Collins Catch The Bear

Description - The Martyrdom Of Collins Catch The Bear by Gerry Spence

The search for justice for a Lakota Sioux man wrongfully charged with murder told here for the first time by the legendary trial lawyer for among many others Karen Silkwood and Randy Weaver.

This is the untold story of Collins Catch the Bear, a Lakota Sioux, who was wrongfully charged as part of a conspiracy with the murder of a white man at Russell Means's Yellow Thunder Camp in 1982, a controversial American Indian encampment in the national forest. Though Collins was innocent, he took the fall for the actual killer, a man placed in the camp with the sole intention of destroying the reputation of AIM. This story reveals the struggle of the American Indian people in their attempt to survive in a white world, on land that was stolen from them. We live with Collins and see the beauty that was his, but that was lost to the pressures of a racist, white society. Today justice is still struggling to be heard in this case, as well as many like it in the American Indian nations.

» Have you read this book? We'd like to know what you think about it - write a review about The Martyrdom Of Collins Catch The Bear book by Gerry Spence and you'll earn 50c in Boomerang Bucks loyalty dollars (you must be a Boomerang Books Account Holder - it's free to sign up and there are great benefits!)


A Preview for this title is currently not available.
More Books By Gerry Spence
View All