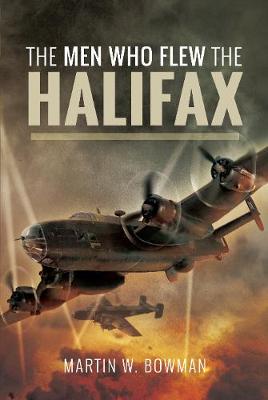 The Men Who Flew the Halifax

Description - The Men Who Flew the Halifax by Bowman, Martin W

This is the story of the air war over Western Europe, much of it told by the Halifax pilots and air crew who took part. It spans the period between 1942 and 1945 and covers the encounters between the Luftwaffe and the air forces of Britain and the Commonwealth. Many unique experiences are recounted from the day bombing raids that were hurled against Hitler's war machine. The author has sought the experiences of RAF and German fighter pilots, who explain how they stalked their prey and pounced from. This book contains vivid accounts of some of the most heroic actions in the history of air warfare. AUTHOR: Martin W. Bowman is one of Britain's best-known aviation historians and authors. His previous books have included works such as Legend of the Lancaster, Confounding the Reich, Duxford and the Big Wings, Clash of Eagles, Lost Wings of World War I and numerous titles in the exhaustive Air War series providing extensive coverage of operations carried out on D-Day and during the Market-Garden offensive at Arnhem. He lives in Norwich.

Book Reviews - The Men Who Flew the Halifax by Bowman, Martin W

» Have you read this book? We'd like to know what you think about it - write a review about The Men Who Flew the Halifax book by Bowman, Martin W and you'll earn 50c in Boomerang Bucks loyalty dollars (you must be a Boomerang Books Account Holder - it's free to sign up and there are great benefits!)


A Preview for this title is currently not available.
More Books By Bowman, Martin W
View All