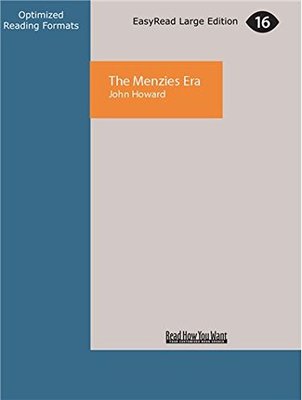 The Menzies Era: The Years That Shaped Modern Australia

Description - The Menzies Era: The Years That Shaped Modern Australia by John Howard

An assessment of Australia's longest - serving Prime Minister, Sir Robert Menzies, by John Howard, Australia's second - longest serving Prime Minister, this is a significant, unique and fascinating history of the Menzies era - a time that laid the foundations for modern Australia. Fresh from the success of his phenomenal bestselling memoir, Lazarus Rising, which has sold over 100,000 copies, John Howard now turns his attention to one of the most extraordinary periods in Australian history, the Menzies era, canvassing the longest unbroken period of government for one side of politics in Australia's history. The monumental Sir Robert Menzies held power for a total of over 18 years, making him the longest - serving Australian Prime Minister. During his second term as Prime Minister, a term of over sixteen years - by far the longest unbroken tenure in that office - Menzies dominated Australian politics like no one else has ever done before or since, and these years laid the foundations for modern Australia. Through the Menzies era, there was huge economic growth, social change and considerable political turmoil.
Covering the impact of the great Labor split of 1955 as well as the recovery of the Labor Party under Whitlam's leadership in the late 1960s and the impact of the Vietnam War on Australian politics, this magisterial book offers a comprehensive assessment of the importance of the Menzies era in Australian life, history and politics. John Howard, only ten when Menzies rose to power, and in young adulthood when the Menzies era came to an end, saw Menzies as an inspiration and a role model. His unique insights and thoughtful analysis into Menzies the man, the politician, and his legacy make this a fascinating, highly significant book.

» Have you read this book? We'd like to know what you think about it - write a review about The Menzies Era: The Years That Shaped Modern Australia book by John Howard and you'll earn 50c in Boomerang Bucks loyalty dollars (you must be a Boomerang Books Account Holder - it's free to sign up and there are great benefits!)


A Preview for this title is currently not available.
More Books By John Howard
View All

The Doctrine of the Trinity; A Reasonable and Necessary Condition of Salvation. a Sermon Preach'd Before the Lord-Mayor and Aldermen of the City of London, at the Cathedral Church of St. Paul, Upon Trinity-Sunday, Anno Dom. 1701. by John Howard, ...
$34.71 $38.57

Expression in Singing: Including Thirty-One Exercises for Voice Culture
$52.34 $58.16

An Account of the Present State of the Prisons and Houses of Correction in the Midland Circuit. Taken from a Late Publication of John Howard, ... to Which Is Prefixed, an Introduction, ...
$39.12 $43.47

An Account of the Present State of the Prisons and Houses of Correction in the Western Circuit. Taken from a Late Publication of John Howard, ... to Which Is Prefixed, an Introduction, ...
$39.12 $43.47